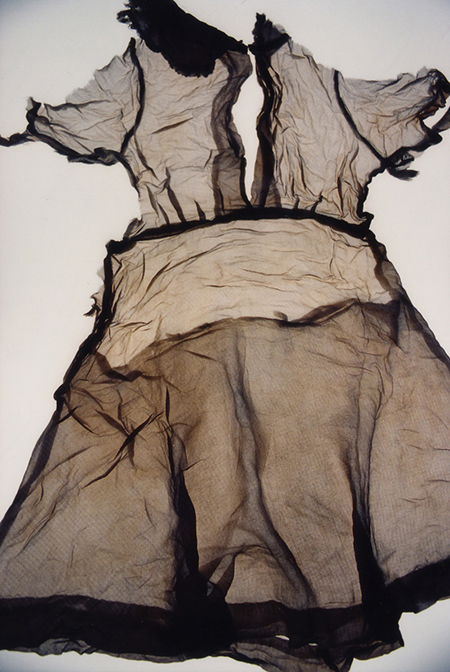 Ishiuchi Miyako is a highly regarded Japanese photographer, if not well known in the United States. She is a contemporary of both Nobuyoshi Araki and Daido Moriyama, postwar photographers who came to prominence in the 1960s and 1970s. "Postwar Shadows" is the first comprehensive exhibition devoted to her work here. The exhibition traces a nuanced career that forms three phases, spanning from 1976 to 2011.

Miyako was born in 1947 and spent her formative years in Yokosuka. She studied textile design at Tama Art University in Tokyo in the late 1960s, where she was also active in resistance movements and women's liberation groups. She never graduated from the university, insisting she could succeed without a degree. Receiving her first camera in 1975, a gift from a relative, she immediately felt kinship with the medium and committed to being a photographer. In 1976, she returned to Yokosuka and began documenting both the familiar and unfamiliar aspects of the city.

In 1945, the United States set up a Naval base in Yokosuka and the American presence came to permeate the city. Miyako's images are personal reflections about her views of the American occupation and her memories of the aftermath of war. The images in "Yokosuka Story” (1976-77), “Apartment” (1977-78) and "Endless Night” (1978-80) are harsh, grainy, graphic, black and white photographs shot from oblique angles. In particular, the subjects in "Yokosuka Story" range from architectural details to quasi-deserted streets with silhouetted figures. They often include fragments of the American influence; for example English language signs or slogans on clothing. Miyako's return to Yokosuka was an attempt to both confront her fears and come to terms with her memories of the city.

The artist used photography to both document the world around her as well as changes in her own and other womens' bodies. In 1987 when she turned 40, Miyako began the “1·9·4·7" series, where she looked at the way time is mapped onto the body by photographing the hands and feet of other women born that same year. She published a book of this work in 1990. What do close-ups of hands and feet tell us about the subject? These dimly lit, anonymous portraits suggest the occupations and class of the women without any formal identification other than numbers. The soft focus black and white images that make up "1·9·4·7" are a meditation on sameness and difference. Ishiuchi continued to investigate changes to the body in an ongoing series entitled “Scars." The images of this series isolate a part of the body that was wounded and later healed. The scars are titled by their cause, be it an accident, illness or war, becoming landscapes burdened with personal memories.

Memory, be it personal or universal, is a driving force in Miyako's work. Before her mother died in 2000, Miyako began making black and white photographs of her aging body, which became the series “Mother's." The images of her mother's skin are presented alongside color photographs of personal possessions — shoes, lipstick, various pieces clothing — that become a celebration of one person's essence. The project about her mother was the catalyst for a commission to work with the Hiroshima Peace Museum. The photographs in "ひろ し ま/ hiroshima" are color prints of objects that survived the bombing. Aware that others had also photographed these objects, Miyako wanted to present them from a feminine perspective. Her solution was to focus on the details in the patterns of women's dresses, the delicate fabrics long since torn and covered with blood stains. Clothing for Ishiuchi, is a second skin and the Hiroshima garments represent the skin of the deceased. Shot against a neutral background, these images convey loss but also the power of life and the spirit of memory. Miyako has remarked that, "the past revisited in the present remains alive" and her collective body of work brings new life to that which has disappeared.