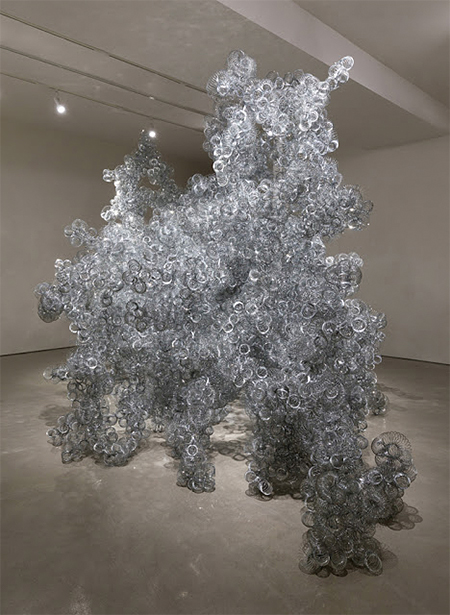 Tara Donovan is one of the most surprising of contemporary artists. Based in New York, she is predictably unpredictable in taking the most humble objects of daily life and transforming them into monumental works of art. Styrofoam cups, drinking straws, buttons, rolls of paper tape — she uses them to create installations that suggest entire environments and unearthly creatures. Often the process is pure simplicity, although putting together the installations is usually very labor-intensive and requires a small team. For example, she has piled hundreds of thousands of drinking straws horizontally, setting them at slightly varied distances from the wall, an effect that makes us believe we are looking at billowing cloud formations. Bunched together Styrofoam cups hanging overhead puts us under the clouds or a neo-Baroque chandelier, and irregular stacks of buttons became a coral reef wonderland.

In her newest series of sculptures and relief prints, she has been using the Slinky. Yep, Slinky, that collapsed spring toy which you might have grown up playing with. They could serve as a yoyo or juggling tool, and if you set one in motion just right a Slinky could “walk” down a flight of stairs, going end over end.

There will be three Slinky sculptures, mounted on the wall and freestanding. Each is made from hundreds and hundreds of the toys. Apparently, Donovan herself does not keep count. The units have been taken part and soldered together, arranged around an armature, and turned into sculptures that look like extraterrestrial creatures with “tentacles” wildly spiraling out in all directions. These pieces are at least partly finalized in situ, so they vary in dimension, but I viewed one previous installation elsewhere that featured a work measuring 6 by 9 feet.

Having worked with Donovan on a glass sculpture many years ago — along with her assistant and several other volunteers — I know how intuitively she works. She has an idea, she orders the components, then the assembly begins. Donovan herself does not read subtexts into her work; there are no hidden meanings that she is trying to get across. She is basically interested in repetitive shapes and forms as building blocks, and seeing what she can do with them. As she said in a recent interview with, “It’s more about their physical properties and what possibilities I can exploit out of them. I don’t feel akin to Slinkys.”

Accompanying the sculptures will be a number of relief prints. These are made from Slinkys, which were flattened, then inked and placed against paper through a hydraulic press. Sounds simple, but it is Donovan’s truly remarkable gift to make simple shapes take on a life of their own. What gets produced is delight.