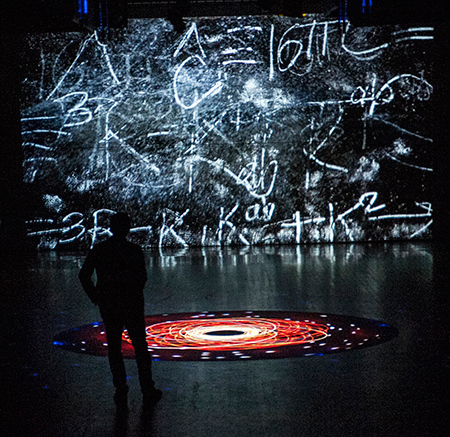 The title “Uncertainty," while tantalizing and mysterious, does not prepare us for the visual and philosophical treasures within the show. Described as a science-meets-art display, albeit one with elements of uncertainty in both disciplines, it is comprised of works that encompass video, sculpture, photography, drawings and assemblage. This exhibition alludes to an international movement combining art with science that is prevalent today in studios, university programs, journals and conferences. At the core of the endeavor is the idea that uncertainty is inherent in science, and has pervaded art since the early 20th century when representation yielded to abstraction.

At the show’s entrance, Thomas McCauley’s video, “Higgs Boson Candidate Event (8 TeV),” illustrates a “Higgs boson subatomic particle,” also known as the “God Particle.” This particle, the so-called “missing link” describing the fundamental physics of the universe, was discovered at the 27-mile-long Large Hadron Collider in Switzerland in 2012. For unscientific mortals, the video has the appearance of a magnificent exploding yellow star.

Nearby, Edward Tufte’s series of sculptures fashioned from stainless steel tubes are, “eccentrically shaped, like fancy, complicated rooftop TV antennae from the 1960s … [with their] loopy whimsy and profound significance,” as curator Stephen Nowlin explains. More edgy than aesthetically appealing, two sculptures in this series are “All Possible 6-Photon Scattering (120 Space-Time Feynman Diagrams),” and “45 Feynman Diagrams, Ninth- and Tenth-Order QED.” The “Feynman” in these titles refers to the late Nobel Laureate Richard Feynman, who worked in the subatomic particle physics field.

Jim Campbell’s black and white videos, “Divide,” "Wave Modulation” and “Wavelength” are low resolution LED lit panels of ocean waves. While clearly portraying ocean waves, in most images the eye can barely discern what they are, and in some cases cannot identify the waves at all. The purpose of these videos of primarily abstract images is to explore the nature of human perception.

“Black (W)hole” is by the Montana-based group Einstein Collective, eight scientists and artists from a variety of disciplines who work together synergistically. Their 11-foot in diameter red, purple and blue projections on the floor form a moving circular image that swirls and evolves from a laser field of stars into a super massive black hole. In time, a small black hole — a region of space-time exhibiting extremely strong gravitational effects — is captured and spins around the larger one. All the while, haunting sounds, seemingly coming from outer space, may be heard.

Owen Schuh and Satyan Devadoss’s four drawings,  “Cartography of Treespace” ("Woven," "Unfolded," "Underground" and "Facets") are based on a term for a mathematical model describing the geometric relation between different branching configurations. This space of trees is described as appearing, “in numerous areas of mathematics, including algebraic topology, enumerative combinatorics, geometric group theory, and biological statistics.” The resulting acrylic, graphite, watercolor, and metal leaf on panel works use symmetry and scientific algorithms, in which the successive patterns are dictated by what preceded them. In doing so, they bridge math with art. They also demonstrate the artist’s intent to surrender to the rules of nature.

Lia Halloran’s “Deep Sky Companion,” a series of 12 ink paintings and complementary solar contact prints, combine illustration with film. They pay homage to the drawings of 17th Century French astronomer Charles Messier, who published an astronomical catalogue of nebulae and star clusters, known today as the 110 "Messier objects.” By using ink — a wet medium with improvisational uncertainties — on translucent vellum, the artist captures the spirit of the images that Messier saw through his primitive telescope three centuries ago.

Marc Fichou’s “Wall” (4,5,6,2,9,8,7), is comprised of seven 8 by 4 foot vertical panels, all mixed media assemblage. Each of these panels is derived from Old World “cabinets of curiosity.” Curator Nowlin explains in the exhibition catalog: “Objects and shapes that possess mysterious qualities have long been subjects of curiosity. The cabinet of curiosities was a favorite theme of Enlightenment-era explorations.” Among the numerous objects attached to the seven panels are: photos of space, galaxies and hurricanes, books, the artist’s personal notes, old computer chips, models of brains, coyote skulls and a plastic starfish.

The most “scientific” pieces in this show are Donald A. Glaser’s “Artifacts,” printed photos, based on Nobel Laureate Glaser’s 1950s era glass plates of the bubble chamber that he invented, “a device that allowed scientists to track the paths of electrons, protons and other elementary particles after collisions, which led to the discovery of whole families of new particles,” according to the wall label. The three photos in this series, based on original Glaser glass plates, courtesy of Caltech, are black on white or white on black designs, comprised of swirling figures and straight lines. The overall impression of these photos, to the unscientific eye, appears as the visual interpretations of romantic music.