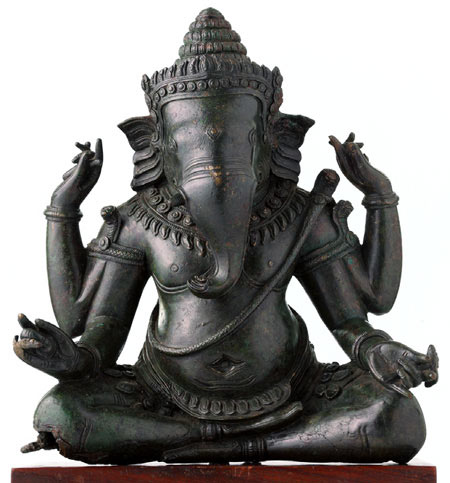 A metals conservation laboratory was recently established at the National Museum of Cambodia with financial help from the Getty Foundation and a long-term partnership with the Smithsonian Freer and Sackler Galleries. As a result several of the works on view as part of “Gods of Angkor: Bronzes from the National Museum of Cambodia” were conserved by the new lab and have now toured both American museums as the first international exhibition that features the work of Khmer bronze artists.

The Cambodia Museum is located in Phnom Penh and is in the process of establishing a solid foundation for their professional activities. The countries of Thailand, Laos and Vietnam flank the Southeast Asian nation and push it against the Gulf of Thailand. It is a country attempting to overcome its war-torn history and celebrate the cultural offerings it has in its backyard. The museum itself has a rich history that dates back to the early 20th century. Growing, then closing (the museum was abandoned in the 1970s), and eventually reopening it has become a significant cultural institution that promotes an awareness of Cambodia’s history and heritage from the pre-historic to post-Angkor periods, which ends in the 19th century.

The exhibit features twenty-six objects and sculptures from the National Museum, and they are all similar in size. The bronzes range from the 9th to 15th centuries, which coincides with the period of the Khmer Empire and represents the mystery and wonderment of this ancient civilization. It is not a chronological exhibition nor is it representative of the Cambodian reign or artistic styles. It is rather a selection that highlights objects rarely seen outside Cambodia.

The past civilizations of Cambodia hold a special significance to historians and archeologists. Angkor was one of the largest preindustrial cities in the world – a crossroads of many peoples with many religious and spiritual traditions. But there is much that is unknown because of poor documentation and lack of primary sources. This absence of source material is part of what fuels the speculation and mystery.

Cambodia is home of the world’s largest religious temple, Angkor Wat, considered one of the Seven Wonders of the World. Known for its exquisite decoration and architecture, the peaks of the temple reach out amongst the trees and the detailed exterior features a baroque-like texture that is contrasted by the tropical location. Built in honor of the Hindu god Vishnu, the ruler Suryavarman II chose this god to represent him during his reign. Despite this origin the complex temple system is also an important place for Buddhists. This is why the majority of the objects in the Getty exhibition are Hindu and Buddhist divinities. Primarily devotional objects like the “Vishnu-Vasudeva-Narayana” or future Buddha “Maitreya,” they are small enough to carry and can be used in the home.

Cambodia's religious practice from the 9th to the 13th century was primarily Hinduism intermingled with Buddhism (which eventually became the state religion). The two major influences on its culture come from India and China as devotees traveled to various destinations in the Southeast. The “Vajra-bearing Guardian,” a Chinese piece from the late 6th-7th century is an example of an object from China that found its ultimate home in Cambodia.

A sculpture of "Ganesha" from the 13th century is particularly impressive and stands out amongst the objects on display. It stands only twenty-six inches tall, and the seated figure has multiple arms and the head of an elephant. Ganesha, a son of Shiva, is a Hindu deity that is associated with a number of characteristics and symbols. The big belly refers to digesting the good and bad in life. The large ears and head suggest listening and thinking big, while the small mouth suggests talking less. The seated pose and four arms are common characteristics, although they occasionally change. In this interpretation, Ganesha appears to be in a meditative pose. Balanced, quiet, and powerful, Ganesha is referred to as the god of wisdom, remover of obstacles, and lord of beginnings.

Another interesting piece, "Crowned Buddha" is a 12th century devotional object that imparts to its figure a stoic and soft aesthetic. His eyes are closed and his palms are raised with his fingers pointing up towards the sky. This gesture imparts fearlessness and the small bronze appears content. While there are still uncomfortable differences between Hinduism and Buddhism, the teachings of the Buddha created hope for his followers. This particular figure was reconstructed from nine separate pieces and is one of the products of the new conservation facility.

All of the objects and deities are cast in bronze. A favored material with the elite, the bronze works here display but a small portion from among several thousand housed within the National Museum. There is a science to casting bronze and the various examples point to the sophistication of these cultures as reflected by their careful execution. A mixture of copper and tin, bronze must be heated into a liquid form in order to be manipulated. It appears to have been reserved for finer objects, although it's unknown when or how this technology was developed in Cambodia.

One would think that the partnership of several large institutions and the term “Gods” displayed prominently in the title would equate to a bigger than life exhibition. Instead these small or in some cases diminutive sculptures are meant to be engaged on a personal level. Though the selection does not represent the story of Cambodian art, the National Museum is dedicated to this goal; such an exhibition must be left to the future. Instead, this exhibition is a series of highlights that represent a culture far removed from our own. But the exhibit is more than a celebration of culture — it's a window into a past that we can't quite picture.