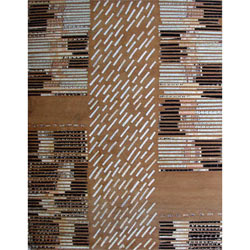 The lure of the open road inspired Anne M. Bray’s state-by-state collage maps and oil paintings back in 2000. But her newest prints and collages totally avoid any romantic infatuation with the highway in favor of what she names as a longer running love affair with pure abstraction.

In the prints and collages in her new show, “Pattern Recognition”, the artist sternly pares down her pictorial compositions into bands and grounds of slashed or scrawled marks. Bray plays with their presentation as quick gesture, showers of spontaneous line, columnar patterning or assembled calligraphic lines. Yet in all their formats they are always a product of the hand, something both casual and methodically produced. In images like the monoprint “Inked 2,” narrow horizontal bands of tightly spaced black squiggles suggest cramped handwriting on paper or an old newspaper. Fluttering down to overwrite this jammed black and white ground are several vertical columns of short erratic red lines that read like visual static from the pen of an obsessive-compulsive editor.

There is a sense of compressed and mute energy to Bray’s freehand marks as they align in images of tight regimentation. So similar to written words, her scrawls pointedly never resolve into language. In the large collage on canvas piece, “Screen” Bray marshals lines of what look like excised strips from old penmanship lessons into staccato columns of linear patterning  Here areas of delicate color and bold black read like a cut and paste I Ching or a  truncated system of communication whose opaque meaning must simply be absorbed visually because it cannot be read.

In all this non-objective imagery, however, traces remain of Bray’s earlier road paintings and her pieced-together maps. The rain of fine slanting lines blowing across the grey paper of the lithograph “Slashed #6” strongly suggests a storm saturating a wet, muddy field. But the suggestion is so lightly made it quickly dissipates into an awareness of the quickness and liquidity of the white and black lines that are the image’s only real subject. Landscape again is suggested only to disappear in a downpour of slanting black lines and red hail in “Inked #1”. What remains is a congealing pattern of random marks without any reference but to the hand that drew it.

Stephanie Visser’s richly colored mixed media landscape abstractions echo with a kind of organic fluidity that recalls Abstract Expressionists like William Baziotes and the crystalline landscape geometry of Nicholas de Stael. Visser literally builds up textured surfaces on canvas and panels by covering them with different kinds of paper, newsprint and scratched metal. Then she over paints or saturates the materials with washes of pigment, delineating and piling up abstract forms that suggest masses of rocks, stretches of canyon, or dense, overbuilt cityscapes.

All the submerged papers and materials churn up Visser’s surfaces in unexpected ways. There’s a hint of detritus to the landscapes she paints with an unsettling array of buried, cast-off things or nature artificially simulated. It is the paint and color that unifies and calms the activated surface. Strong brushwork draws shapes from the chaos, flattening and glazing the agitation into suggestions of rock, water, mountains or open ground.

The skyline of a massive red landscape pushes against a small strip of flat, intensely colored, opaque blue sky in the collage painting “Lay Line #4.”  Small patches of darker blue, bright yellow and green flash at the bright horizon but seem to grow more uneasy as they slip down the transparent russet ground which makes up most of the image. In that raw looking landscape random, ragged shapes seem to be struggling up from below and beneath the surface. We can catch snatches of writing, and see bits of newspaper drowning in a thin ruddy wash, or seemingly weighed down by scumbled paint. Below what looks to be a clear, almost oppressively solid, blue sky Visser’s red earth masses in a subterranean rebellion.

Bray and Visser both use collage and mark making to literally construct their abstract images. Darlyn Susan Yee uses string, knots and tying. Repurposing a weaver’s white cotton warp that usually invisibly supports a flat rug or cloth Yee turns the knotted string into three dimensional sculptures and images. It’s not hard to see laboriously crafting a weaver’s support fiber into real-space forms as a feminist-inspired bid for acknowledgment of women’s work in culture and history. But we sense a stubborn denial of invisibility only in pieces like the part bandage/part mask “Out of the Blue.” Here the wrapped and tied warp is knotted into a small-eyed, corn-rowed face too tightly wound to be able to smile. That tension and the way the material’s history draws us into a larger context of meaning would be welcome in many of the other work’s more abstract and literal references to vessels, oceans and plant life.