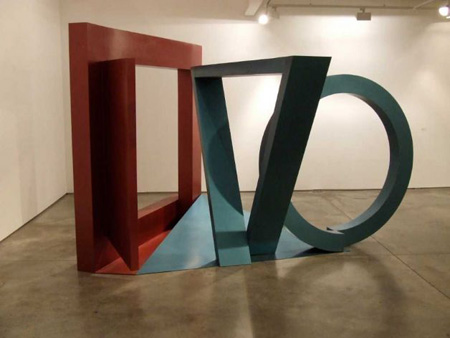 Beginning in the early 1960s, Phillip King helped revolutionize British sculpture with his dramatic use of color and non-traditional materials such as fiberglass and plastic in large-scale abstract forms. “Four Decades with Colour” is an intriguing survey of his much-lauded, more than 50-year career that he began as a student of Anthony Caro and assistant to Henry Moore. A longtime professor of sculpture at London’s Royal College of Art, King served as president of the Royal Academy and received the International Sculpture Center’s Lifetime Achievement Award in 2010.

This survey ranges from early, geometric tabletop forms in brightly-colored fiberglass to more recent experiments with painted PVC foam, though he’s also worked with clay, wood, bronze, steel and aluminum. Despite his use of brilliant color and highly layered geometric forms that tend toward the whimsical, King avoids becoming too cartoonish while maintaining conceptual rigor glossed with a fine sheen of intellectual humor.

A giant-size blue fiberglass cone topped with enormous batwings suggestive of a Mongol warrior’s helmet, “Genghis” is a seminal work that was featured at King’s 1968 Venice Biennale exhibit and is still often reproduced in contemporary sculpture textbooks. “Genghis” was recently part of an exhibit in China and during shipment to South Texas had some paint scraped off, though it remains a regal showstopper that dominates this exhibit.

“Darwin,” a large-scale installation-type piece that you can walk through, features an 8-foot-square magenta window with an open shutter outlining a teal-colored triangle and circle in a three-dimensional still-life. Commissioned in 2010 by the University of Cambridge to celebrate the 200th anniversary of Charles Darwin’s birth, the giant, exploded picture plane and frame symbolizes the way ideas are formed and then make their way into the wider world.

King once said he wanted his sculpture to catch up with the paintings of American abstract expressionists such as Jackson Pollock and Barnett Newman. Indeed his large wall pieces resemble three-dimensional geometric abstract paintings that appear to be erupting from the wall. A minimalist ocean wave curls in “Blue Swell” over chunky layers of green in a purple box. Peering into “Blue Slicer” can feel like you’re being pulled into a whirling, geometrical vortex with blades of yellow, blue, green and purple. The most recent work, “Emergence,” is a kind of radiant, segmented trench of painted PVC foam that rests on the floor.

But while most of his work is primarily built from geometric forms, King makes some use of some realistic elements. “Sun, Bird, Worm, House” (1986) is perhaps his most traditional work: a small bronze with a sun-like orb, a stylized bird, a wiggling brown worm and an upside-down house. Regarded as one of the “cheekiest” of his generation that upended British art, King knows how to use humor to pry open closed minds.

Also on view at the Blue Star are abstracted wooden figures by Philip John Evett, who taught King at Christ College, Cambridge, in one of the British artist’s first sculpture classes before Evett emigrated to the United States and began a long teaching career at Trinity University in San Antonio.