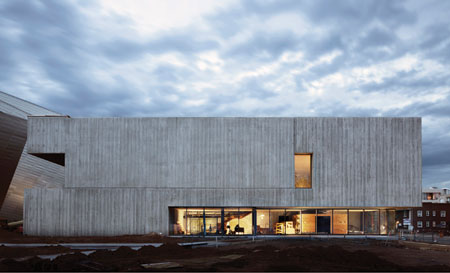 It was on a sunny morning back in August of 2004 when then Denver mayor--now Colorado governor--John Hickenlooper announced that Patricia Still had chosen Denver to be the recipient of a hoard of riches in the form of 2400 paintings and other works by a seminal figure in Abstract Expressionism, her late husband, Clyfford Still. Beginning in 1980 when the artist died, Patricia had been the spiritual keeper of Still's flame, and, not incidentally, the legal controller of his huge estate.

The reason that Still had retained so much of his life's work was not because he couldn't sell them, but because he wouldn't. Still had been a painter since the 1920s but he achieved worldwide fame for his abstract expressionist work in the late 1940s and early '50s. Discouraged by the cynicism of the art world, Still withdrew from the gallery scene in 1951, and after that his work was only rarely exhibited. One exception was the retrospective at the Metropolitan Museum of Art in New York in 1979 with the elderly Still controlling, as much as was humanly possible, what was shown in it.

After his death, Patricia sealed off his oeuvre. What this means is that most of Still's pieces have never been shown publicly before and were unknown to any but Patricia and a close circle of friends and family before now. Patricia made the decision to give the works to Denver, in exchange for a promise by the city that it would facilitate the building of a museum to provide a proper repository for the priceless works. That was the deal Still himself had laid out in his will. Any American city willing to present Still's work--and only his work--in a specially created space and with any number of limitations and restrictions imposed by the artist, could have most of his life's output as a gift. And it was Denver that stepped up to the plate and took on the challenge, despite the fact that Still was not a native son--he was born in North Dakota--and that he had no known association with the city during his lifetime.

Nonetheless, on November 18 of last year, the new Clyfford Still Museum, designed by Brad Cloepfil's Allied Works Architecture, opened its doors to the public andinstantly becomes one of the most significant single-artist museums in the world. The cast-in-place concrete building is predominately cubic with various cut-outs and set-backs--most notably the main entrance facing West 13th Avenue. The CSM is situated immediately west of the Denver Art Museum's Hamilton Building, a deconstructionist confection clad in titanium by Daniel Libeskind. The contrast between these buildings is striking: the sturdy and very-grounded Cloepfil building appears positively recessive in the face of the Libeskind's soaring extrovert nearby. The subtlety of the street presence of the CSM is further enhanced by the screen of trees that has been planted on the lawn.

Approaching the building, the sumptuous wall surfaces come into view. The walls feature raised vertical ridges of broken concrete with the results being something like concrete corduroy. The height and width of these ridges vary depending on the wall on which they are used, and the effect is continued on the interior where the different applications are more obvious. Visitors enter under the massive second story volume that's cantilevered to form a porch. The ceiling extends from outside to inside. The cast-concrete ceiling has a pattern made from the grains of the boards that were used to make the mold in which it was cast. The diagonal pattern artfully intersects the vertical wall grooves where they hit one another. The exquisitely detailed lobby has earth-toned terrazzo floors with its centerpiece being the striking grand staircase. Its very sculptural being made of wood with glass sides.

The rest of the first floor is comprised of various functional spaces including offices, a library, a pair of capacious storage spaces behind see-through glass walls, and the archive. The archive represents a second gift to the CSM from Still's widow Patricia. It's made up of thousands of pieces of correspondence and other documents.

All the exhibition spaces, and thus all the Stills, are on display on the second floor that has been subdivided into nine separate galleries. These spaces have varied wall treatments and have ceiling heights that range from very low to very high. The ceilings are noteworthy also owing to the many skylights, as well as the pierced sculptural grills seen in some galleries that are used to diffuse the light. There are also overlooks to the ground floor between some of the galleries with visitors needing to cross footbridges to get from one to another. In all, the structure spans some 28,500 square feet, with roughly 10,000 square feet of that set aside for exhibition galleries.

The "Inaugural Exhibition" will take viewers through Still's entire career, arranged chronologically with galleries dedicated to his early years in Alberta and in Washington state, his maturing work done in Virginia and then in San Francisco, his triumphant pieces created in New York, and finally those paintings he took on during his self-imposed seclusion in Maryland. Two of the galleries have been dedicated to the New York period--arguably Still's most significant era--with a gallery installed with drawings in between.

The "Inaugural Exhibition" was put together by Dean Sobel, the CSM's founding director. Not long after the announcement of the Still bequest was made, Sobel, then the director of the Aspen Art Museum, was brought on to hold the reins and to take the idea and turn it into a museum. Though an undertaking of this size had many midwives, more than anyone else Sobel deserves credit for shepherding the process and bringing it to its happy conclusion. In doing so, Sobel became one of the world's leading experts on Still, and he's come to some conclusions about the artist's development that flies in the face of accepted scholarship.

Most previous writing on Still has dealt with the artist's interest in attaining a state of abstract sublime, and sees that as coming through the landscape tradition, at least on some level. Sobel, however, argues that its origins lie in a completely different place. For Sobel, Still's abstract sublime originates in the figure. And he can point out literal proof in the artist's early work. Sobel is particularly taken with a vertical line or form that translates directly from the representational pieces to the abstract ones. Sobel makes a compelling case since he's actually looked at the entire range of Still's stylistic and artistic development, whereas all that earlier scholarship was based on an awareness of only a limited number of pieces. So that's an unexpected consequence of the opening of the CSM--a completely new understanding of what Still's work actually means.

Still hoarded his work and it's therefore not surprising to find that the CSM is receiving among the lot, work the artist did in his teens--he was born in 1904--but Sobel begins the story with the earliest mature work done in Alberta and Washington in the 1920s. The pieces are realist in style but Sobel sees the first Stillian elements in these paintings of people and landscapes.

Then Still followed the typical path for an abstract expressionist: he worked in a regionalist style, which then gives way to an abstracted surrealism, which then develops into abstraction. Each of these phases is laid out in its own gallery. Interestingly, it's in the gallery where the San Francisco paintings are on display that Still's role as the first artist to arrive at full-blown Abstract Expressionism is revealed. This was during World War II, years before artists like Jackson Pollock and Mark Rothko would make the leap. In fact, the other abstract expressionists were still creating abstract surrealist works at this time.

Still's first phase Abstract Expressionism is comprised of an all-over color field that's been expressively carried out with tons of visible brush marks. Emerging out of the field there are brightly toned vertical lines and forms that Sobel sees as coming out of the figurative work. The lines meander somewhat while the shapes are jagged. The paintings themselves are enormous and thus envelop the viewer in the kind of spiritual or cerebral experience that Still intended. The New York and Maryland pieces are iterations on the same idea, though the work does get lighter, airier and larger as the years--1950s to 1970s--go by. In many of the latest ones, Still has left huge areas of bare canvas, thus linking his work not only to the abstract expressionists but also to the post-painterly abstractionists. The scale that Still worked in during this time was so grand that often there is only one painting per wall in these galleries.

Sobel makes the case with "Inaugural Exhibition" that Still was one of the greatest artists of the 20th century. With the opening of the CSM, Sobel has the perfect vehicle for communicating that heretofore little-known fact.

If there is one dark cloud over the CSM--and there is--it has to do with another batch of Still pieces that have come in subsequent to the original group. During his lifetime Still chose 400 works to be held by his widow Patricia. When she died in 2005, she left them to the CSM to become part of its collection, as she indicated in her will. But earlier this year, the CSM went to court to allow it to sell four of Patricia's pieces to provide an endowment. It is considered improper for a museum to sell works to provide for operating expenses but there is a loophole. The CSM hasn't formally accessioned these Patricia pieces. Since the CSM doesn't yet own them, they are apparently exempt from this standard. It's all a little slippery but regardless, four Still paintings, with a combined sales estimate in excess of $50 million, will be put up on the block at Sotheby's on November 9. Sobel does say that the rest of Patricia's gift will be accessioned by the CSM and that this sale is a onetime event.

All told, the CSM cost $30 million dollars to get up and running with all that money having been privately raised and with none of it coming from the taxpayers of the City and County of Denver. That's a pretty cheap price to pay, when you consider that there are many Still paintings inside that are worth at least that much, and some of them even more. Having spent the last several years immersed in the project, CSM director Sobel has concluded that Clyfford Still was one of the greatest artists of the 20th century, and furthermore, he's convinced that once the museum is open, nearly everyone in the art world will readily agree.