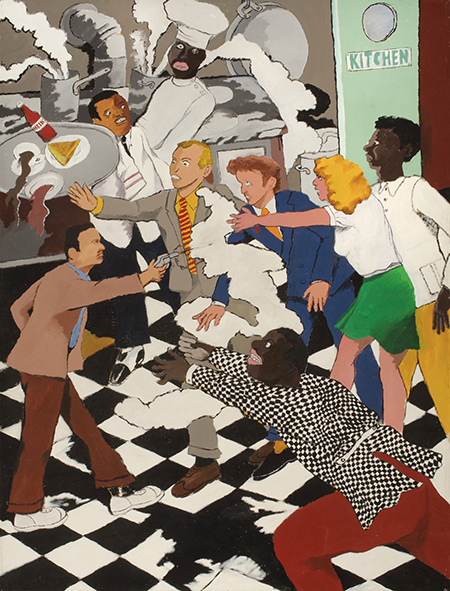 In a career that spanned six decades, the late Robert Colescott’s unusual figurative style incorporated elements of pop and folk art into a unique perspective on and vision of American life. In this most comprehensive exhibition in Los Angeles in over 20 years, Colescott’s combination of wit and empathy can be seen to expose racism, racial omission, interracial relationships and sexual misdeeds. There is the astonishingly balanced chaos of “Kitchen Assassination,” illustrating the shooting of Robert F. Kennedy. The topic of cultural identity is raised in the vibrant “El Mahdi,” a painting inspired by the artist’s teaching experience in Egypt.

Colescott also brilliantly appropriated images from art historical sources, offering a revisionist take that featured black protagonists long before the emergence of Kehinde Wiley. Colescott’s take on classic paintings by Renoir, Cezanne, and particularly Emanuel Leutze’s iconic “Washington crossing the Delaware,” which he recast as “George Washington Carver Crossing the Delaware,” have a very different feel today than when first exhibited over 40 years ago. Also on view are later works that comment on political events as such as the invasion of Iraq. Regardless of the subject matter, each of Colescott’s works exhibit a vibrant palette and an even more sharp-edged sense of humor.