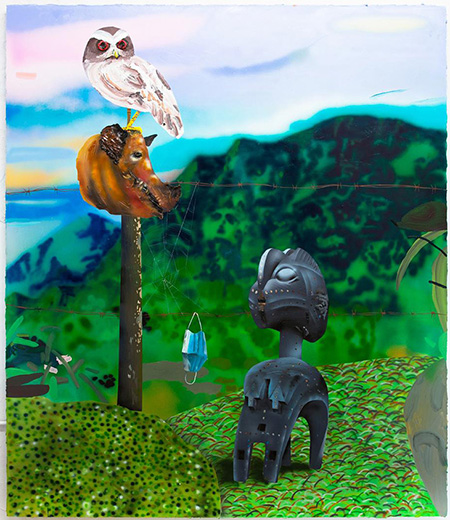 A wonderful small show of paintings by Omar Velazquez just opened at the Museum of Contemporary Art, and I’m afraid it won’t get much attention.  That’s because the MCA has attracted a lot of bad press lately [see Robin Dluzen’s column “The MCA Blows It,” March 27—Ed.]. Most damaging was a piece by Kerry Cardoza that ran in the Chicago Reader in March.

It was all pretty sickening for Chicago.

But this review is about what the MCA does well, in this case Velazquez’ jewel box of an exhibition, comprising four large paintings and three hand-sculpted musical instruments fashioned in the shapes of tropical fruits. The show is tucked away in a niche-like gallery off the staircase, a stopover on the way to the big show upstairs. In the outer gallery viewers can listen to the joyous sounds of jibara, improvisational Puerto Rican country music.

Velazquez, who spits time between Puerto Rico and Chicago, is a lush surrealist with a philosophic agenda. His paintings combine natural beauty with left behind trash. They look hot and abandoned, like de Chirico’s might have if that artist had grown up near a rainforest. They entice with views of local flora and fauna, but they are not idyllic. Each is a dreamlike scene of violated paradise, beautiful despite the garbage left behind by outsiders who’ve come to consume the island’s resources.

Native Taino folklore infuses all of Velazquez’s work, maybe in an attempt to make sense of and overrule the island’s more recent colonial past.“Maboya,” a Taino word that means evil spirit, depicts a landscape of mountains scarred by barbed wire and presided over by an impassive owl.

Humans never appear in Velazquez’s work, only their long-lived trash — empty Lysol bottles, wire fencing, a metal object that looks like a crowbar. Instead, it’s animals that populate his paintings. There's a duck, a heron, a roasted pig’s head that looks disconcertingly alive, and most excitingly, the immense snout of a caguama, a leatherneck sea turtle, that emerges among mangrove roots from opaque waters beneath a shrimp-colored sky. The little show packs the kind of punch we need right now, all full of mystery, virtuoso paint-handing, crazy color (mango skies!) and a pitched battle between man and nature that shows nature winning by a literal nose.

Meanwhile, the controversy upstairs with “The Long Dream” fiasco rages on. Empty spaces appear on walls where art has been withdrawn. I’m glad the museum thus holds its own ethical inconsistencies up to the light. I also hope artists stop removing their work from “The Long Dream.” We need to see it. Maybe the show will suggest its own solutions. (To make radical peace, couldn’t the museum share the wealth they claim not  to have?)

I walked away from my first visit to the MCA in a year not thinking about money at all, though. I had two different works in mind and they were talking to each other, not arguing. One, from “The Long Dream,” is by Cheryl Pope. It’s a floor mat from her series “When I Get Out,” printed with the words of a 15-year-old boy incarcerated in a juvenile detention center in Washington D.C. The printed words are his reply to her inquiry as to what he’ll do when he’s released: “I’m Going to Start by Beating Someone Up.” The mat is 8 by 6 feet, the exact dimensions of the boy’s cell. Pope, who calls her work poetic journalism, is a former Chicago Golden Gloves winner; she knows from beating people up. I’m really glad she didn’t pull this piece from the show.

The other thing I can’t stop thinking about is Velazquez’ fruit-colored paintings, especially the head of that leatherneck turtle rising — mysterious, ugly, glorious — from the opaque water. Humans may and do make a big mess, Velazquez seems to say. But there are forces and creatures and a consciousness below the surface that will rise up to right things, if not always to our collective advantage.