Fair Use: What's Mine is Yours
Altman-Siegel, San Francisco, California
Review by DeWitt Cheng 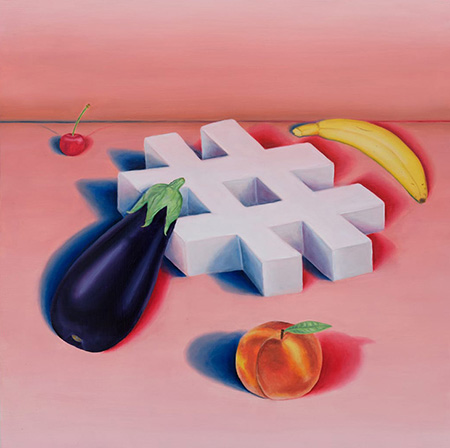 The use of borrowed or collaged materials in art, or bricolage, goes back a century, to Cubist, and then Dadaist and Surrealist collage. Now renamed and rebranded as appropriation, it is one of the primary aesthetic strategies in contemporary art. With the growth of digital technology and culture, and the postmodernist denial of pure originality, the juxtaposition of unrelated elements, which once provoked shock and dismay, is now a recognized artistic strategy for use in social critique, especially in conceptual art, which generally adopts an intellectual, distanced attitude toward sociopolitical content. Digital culture, with its casual information-surfing, its anonymity, and its capacity for easy cut-and-paste copying and transformation, might have been designed expressly for aesthetic appropriation — for reusing, recycling and repurposing.

The legal phrase “fair use” allows the creative re-use of copyrighted materials without permission, as long as the secondary artwork has been sufficiently altered from its original state for the purposes of “criticism, comment, news reporting, teaching (including multiple copies for classroom use), scholarship, or research (Wikipedia).”

Art mavens who have followed prominent cases of appropriation or plagiarism involving famous artists— Rogers v. Jeff Koons, Carlou v. Richard Prince among others — know what a can of worms “fair use” opens, since we are making lawyers and judges the de facto arbiters of aesthetic rectitude and  the “redeeming social values” once adduced to defend pornography — when the judges didn’t recognize it when they saw it, in the words of one. Appropriation is here to stay, although it remains a fraught area of legal contention. A recent news item revealed that cops, while being phone-filmed by citizens, play copyrighted music on their phones, defensively, in order to prevent ‘illegal’ YouTube dissemination. As one of the outlaws in Phil Kaufman’s film, “The Great Northfield, Minnesota Raid,” argues: “It’s true; it don’t have to make sense.”

“Fair Use: What’s Mine is Yours” was curated by Alison Gass, Director and Chief Curator of the San Jose Institute for Contemporary Art, after conversations with her brother Andy, a copyright law expert. The exhibition, which given this backstory, might have highlighted the legal morass. Instead, it focuses on the work of seven contemporary appropriationists, letting the work speak to the copyright issue on its own terms: Darren Bader, Bethany Collins, Troy Lamarr Chew II, Simon Denny, Laeh Glenn, Trevor Paglen, and Sara VanDerBeek. The impact of and ambivalence towards digital culture is reflected the exhibition press release and the artworks’ titles (accessible on your smart phone if you scan a QR code, but not in wall labels or didactic text). Spaced throughout two galleries of the high-ceilinged space, the pieces are individual conundrums that require thoughtful attention, but do not speak to each other to advance any curatorial thesis. Artist’s statements about the pieces would have been helpful.

Seven of the twelve pieces are pictorial. Chew’s oil on panel, “Textual Relations,” is a tabletop still life of traditional (perhaps even Freudian) symbols of nature’s fertility: a cherry, a peach, a banana and an eggplant. They surround not a porcelain bowl, but a white hashtag symbol, presumably 3-D printed. It’s a playful commentary on the erogenous power of words, even whispered to Siri and passed on electronically. Chew’s “The Freak Show” depicts another community of mysterious oddballs, presented onstage before a salmon-colored curtain: a white frosted cake rests on the hindquarters of a donkey, observed by a macaque, a roster and a cobra.

Trevor Paglen’s “Lenna: Empress of Invisible Images, Queen of the Internet” is a life-sized digital print of a Playboy Playmate bedecked in boots and hat, with superimposed circles of various sizes suggesting Venn diagrams, planetary epicycles, earthquake epicenters, and other scientific data. Eros, mocked again. Leah Glenn’s “Code” and “Midi” are hard-edged abstractions of irregular forms, suggesting, respectively, camouflage, bark patterns, mapped territories or gerrymandered districts, and the colored overlays of comic-book illustrations minus the black-lined key drawings. Darren Bader’s “The 7th (and final) time I’m exhibiting this work” is a digital print on vinyl, mounted directly on the wall. Two architectural line drawings are superimposed, one an elevation view of a brick building, replete with glass blocks, and the other a one-point perspective view down an airshaft. Finally, Sara VanDerBeek’s “Ancient Woman 2022 X” presents a triple photographic view in pale grays of a Greek goddess statue, in spotless white marble, enhanced and obscured by swipes of pale blue Watercolor Revlon Photoready Avant Garde eye shadow, a commentary on Western gender stereotypes.

Four pieces are more conceptually driven. Trevor Paglen’s “ImageNet Roulette” is an interactive piece that questions the digital use of keywords in fostering social stereotyping. Bethany Collins’ “Find 1982 II” is a quartet of graphite drawings of identical dictionary definitions of the word ‘find,’  redacted with erasures and smears, leaving only one word or phrase legible, e.g., ‘oneself,’ or ‘something lost.’ And finally, we come to Simon Denny’s two Duchampian philosophical assemblages in laser-cut Plexiglas boxes. They have the look of scientific apparatuses, with long, key-word-laden titles. “Blockchain Future State Fintech Gamer Case Mod Deal Toy: Backfeed x Ethereum” contrasts a symbolic butterfly, confined within a computer case, above, with a wooden tombstone, below, inscribed with the word ‘government,’ and bearing sociopolitical charts. “Fintech Gamer Case Mod Deal Toy: 21 Hype Cycle” contains a similar tombstone set atop lava stones at the bottom, while the top half carries a laser-cut chart of the Hype Cycle, with Visibility plotted against Time. Labeled for prudent planners or contemporary economic pilgrims are the Peak of Inflated Expectations, the Slope of Enlightenment and the Trough of Disillusion.

The complex unpredictability of contemporary life increasingly reminds us of Ray Bradbury’s story about the time travelers who accidentally step on a prehistoric butterfly and return home to find a Hitlerian tyrant in power. If critical thinking skills are what we need, as academia has been promising — but perhaps not delivering — then maybe art with its true-to-reality complexities and contradictions can be part of the solution. If only viewers and artists can reach common ground.