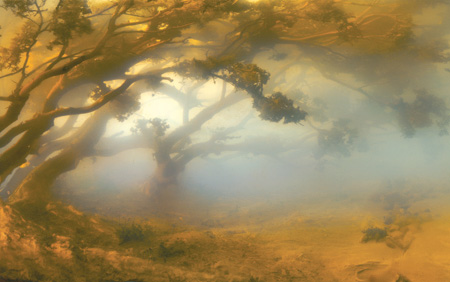 Romantic landscape painters once sought to express a sense of their humility in the face of a supreme power. Their majestic mountains, overpowering sunsets, craggy peaks and sweeping vistas may all evoke both a sense of awe, at the beauty and wonder of nature, and a subliminal sense of man's presence as dwarfed and almost inconsequential in the presence of such grandeur. New York-based artist Kim Keever's photographic landscapes may, at first, seem to share the same 19th-century intentions. Clearly, one may be swept up in the beauty and drama of his exotic mountain ranges, seashores and misty bogs, and the evocative play of light suggestive of the setting of the sun or the moon shining through clouds. Yet these convincing spectacles take place, we learn, in a rigged-out fish tank, set up in the artist's East Village studio, where a deft hand with materials, fluids, pigment and light, along with a keen photographic eye, allows the artist to fool us, initially, into believing these images evolved organically. Part of his process is, ultimately, cluing us in to the human intelligence behind their design.

Keever, who will be included in "Controlled Environments" at Mark Wolfe Contemporary Art in San Francisco in January, was on track for a career in "thermodynamics and heat transfer, basically you could call it mechanical engineering," when he realized "I just really didn't want to be an engineer, I wanted to be an artist." He shifted gears, and has never looked back. Naturally, his training in fluid dynamics and concepts of structural integrity has been a valuable asset in his work.

As a child, Keever recalls, "My dad had a nice place in Virginia with a view over the marshes. I was mesmerized by the sunsets." He also remembers watching fiddler crabs scurry across the beach and retreat in their holes, "a kind of reality truly overwhelming as a child." His fascination with constructed environments dates to visits to the Field Museum in Chicago, and his love of their dioramas of nature.

Moody and at times otherworldly, Keever's landscapes evoke not only the natural beauty of our planet but suggest vistas from another reality. In Palm 12 (2008), a primordial, swamp-like landscape, covered in low-lying vegetation, lies in wait beneath a yellow-gray sky; pinkish light peeps through, as though perhaps at break of dawn. Here, as in many of Keever's works, we have the sense that he has prepared a stage on which our imagination is invited to set action into play.

During his transition from budding engineer to fine artist, he spent a number of years as a painter, but ultimately tired of it. Keever found inspiration in Cindy Sherman's conceptual self-portraits. "I'm always amazed by her personal connection to photography--really very personal. They seemed, and still seem, very inventive." Although his work lacks Sherman's figurative reference, one may find a relationship through the painstaking care the artist employs in setting plaster mountains, model trees, bushes and other foliage in place, and creating an immersive environment with gauzy clouds, swirls of paint in water and carefully positioned theatrical gels. Keever, in addition to his life-long interest in art, had an early passion for model railroads and aquariums: who knew his mature work would involve a conflation of the two?

Keever's work has recently been attracting increasing amounts of attention, with four museum shows in the past year alone. When we spoke, his show "Early Man and Missing Landscapes" at Charles Bank Gallery in New York had just closed and "Kim Keever," at David B. Smith Gallery in Denver, was nearing the end of its run. Clearly, his beguiling illusions have begun to make waves.

"Controlled Environments," a group show featuring Kim Keever and five other artists, will be on view at Mark Wolfe Contemporary Art, in San Francisco, from Jan 12 -- Feb 24, 2012.
www.wolfecontemporary.com