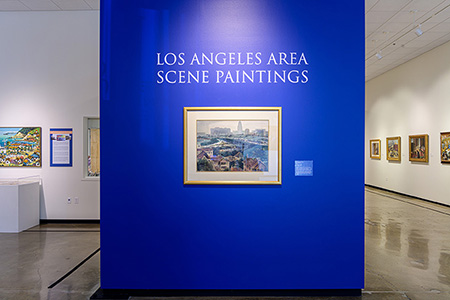 The film, “Night at the Museum” (2006), about a night guard observing the Museum of Natural History’s art and artifacts come to life, might elicit curiosity about occurrences at SoCal museums during the first Spring pandemic lockdown and the current one.

When all is quiet in museum halls and galleries, are the art pieces having visual conversations? Are they moving out of their cases and frames to confront each other and the occasional custodian who enters the building?

A recent interview with Mary Platt, Director of the Hilbert Museum of California Art on Orange County’s Chapman University campus, revealed a scene of constant human activity, both within the museum and virtually, in spite of this year of isolation.

“When Chapman shut down in March, all keycards were turned off and no one could access the campus buildings except for essential workers,” she said. “Because the museum has a multi-million dollar collection and someone needs to monitor it, I made the case to the university that it would be better if that person were me — who knows the art. They soon agreed and I was able to fully re-access the museum a week after the campus closure.”

One of Platt’s immediate tasks was to reschedule exhibitions. This included extending the runs of “Los Angeles Area Scene Paintings” with narrative style paintings from 1913 to the present, and “Who Framed Roger Rabbit” with 30 original cels from the 1988 film. Both exhibitions had opened two days before the March 17 museum closure and were scheduled to run for six months. The shows — which were made viewable starting October 13 through November 16 — will remain up through February 20, 2021. Hopefully the museum will open for in-person visits before then.

Rescheduling included cancelling a month-long run of work by the California Art Club, which was force to go entirely online. Platt and the museum staff also put off until March 2021 an exhibition on California Landscape Painting, curated by Jean Stern, the former Irvine Museum Executive Director, and another show on the overlooked yet masterful California artist, Henrietta Berk.

While Platt also worked on ad schedules and writing grant applications, her art related tasks included daily social media updates, and Zoom-based exhibition planning meetings with Hilbert Museum and Chapman University staff. For the former, posts on Facebook and Instagram, titled, "At Home with the Hilbert Museum" were uploaded daily, each post featuring one painting from the museum collection. This effort, shared and boosted by Linda Stern and hundreds of others, quadrupled the museum's social media following. As a result the museum plans to continue engaging the public more aggressively with these platforms in the future.

Zoom sessions soon filled up a significant part of Platt’s workdays. “Mark Hilbert (the museum’s founder) is a great booster and cheerleader,” she said. “We often meet on Zoom or for socially distanced lunches. We talk about plans for the museum expansion, to occur in 2022, and about future exhibitions.”

Platt and the museum staff hosted a public Zoom discussion on its “Who Framed Roger Rabbit” exhibition. Richard Bryant, Executive Director of Chapman's Musco Center for the Arts, and his team worked with her to produce the discussion, which has been viewed in archived format by nearly 4,000 people.

Platt also attends monthly Zoom meetings that bring together fellow Orange County area museum leaders. These informative sessions, which include tips on how to reopen, are hosted by Arts Orange County, OC's arts council, and by Richard Stein, the organization’s president and CEO.

Early in September, as the Hilbert Museum anticipated re-opening, Platt and her staff wrote a detailed 30-page re-opening plan.

Platt sums up her eight-month-long experience since the March 17 lockdown: “Even though we can’t have an in-person community, we quickly formed an online/virtual community of support for the arts and for each other. We are very grateful for having such a great arts community here at Chapman and in the OC.” It’s a story that is being played out in local art communities throughout the country.