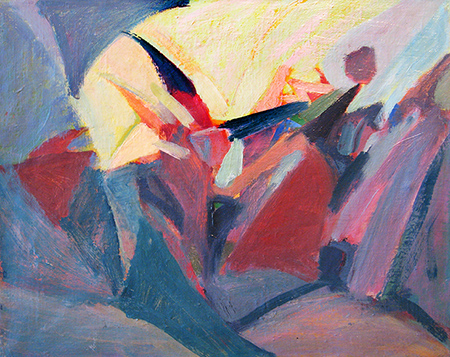 Those interested in the history of Pacific Northwest art owe a tremendous debt of gratitude to curator David Martin for assembling “Origins: Northwest Abstract Art 1920-1960.” The result of years of research, which must have involved foraging in attics and old trunks, “Origins” casts light on many questions scholars and curators have pondered for years: Who was the first modern artist? Were there advanced artists outside of Seattle? How close to the real origins of abstract art in Europe and New York were the artists Martin has discovered?

Without an accompanying catalogue, wall texts and labels help us piece together the pathways to complete abstraction in Oregon and Washington states. Setting the record straight, many women artists, for example, comprise the varied cast of East Coast and European-trained artists who somehow, for various reasons, found themselves in the remote Pacific Northwest. For example, Peter M. Camfferman, a Dutch immigrant, was nearly the same age as Mark Tobey yet virtually unheard of because he and his wife opened their own art school on remote Whidbey Island in the 1920s. Camfferman’s 1924 “Untitled” oil-on-paper qualifies as the first work of abstract art made in Washington State, so far as Martin has been able to determine. The earliest piece on view, it is incredibly beautiful and promising, carefully colored and drawn, with brushstrokes occasionally overlapping but never completely meeting. The size is tiny, but the sense of space is huge and expanding. Margaret Camfferman was nine years older than her husband, but her works, such as “Untitled” (1936) are overshadowed by Peter’s, whose section includes 15 paintings. These include his tribute to another abstract art movement, Synchromism, “Untitled (Synchromist)” (c. 1920). Many of his later works fulfilled the early promise, such as “Untitled” (1933). Primary colors are bold and undiluted.

Martin delineates the various types of abstract art, distinguishing between abstract (or abstracted) art, based on a veiled or concealed image, and non-objective art, completely without subject matter. geometric, dynamic and colorful. In the latter group, Maude I. Kerns was associated with the University of Oregon, where she eventually taught. She needs to be claimed for Seattle, where she lived earlier and flourished. She won a bronze medal at the Alaska-Yukon-Pacific Exposition in Seattle in 1909, and taught at Lincoln High until 1921.

Between her trips to Europe and her New York connections, Kerns became one of only two Northwest artists featured at the Museum of Non-Objective Art (later the Guggenheim Museum). The other artist, strangely omitted from the present show, was Windsor Utley, eventually a private pupil of Tobey’s. Kerns’ “Evening in Time and Space” and “Movement and Countermovement” (no dates) are as worthy as any American painting now hanging at the Smithsonian American Art Museum, a prime repository for art of that period.

While the Camffermans and Kerns may be new names, Elizabeth Cooper, and Louise Crow are even more obscure. Cooper is a big surprise: her tiny undated oils on paper from 1928-30 are completely fresh, just as tender to the touch as British artist Howard Hodgkin. Her “Abstract 1” and “Abstract 3” drag the brush across the surface so the colors of her underpainting gleam through. Marsden Hartley saw and raved about Crow’s pictures. She was in master classes with William Merritt Chase and taught at Cornish Institute in Seattle.

Better-known Seattleites Margaret Tomkins, Glen Alps, and Tobey are also included, as is Raymond Jonson, who grew up in Portland before spending most of his adult life in New Mexico, where he co-founded the Transcendental Painting Group. Tomkins’ heralded Surrealist tempera paintings of the early 1940s have darkened badly and need restoration. Alps, who invented the collagraph printmaking technique in 1955, has never looked better and deserves a broader survey. The magnificent “Blue Space” (1958) must be his largest print, approximately three by five feet. Alps’ training at the University of Washington School of Art brings up the point of academic breeding grounds for abstract art. There can be no question of the UW’s paramount importance in producing the region’s major artists, both its faculty and illustrious alumni, which includes Francis Celentano, Wendell Brazeau and Spencer Moseley (all omitted from “Origins”).

Washington State University was the other hotbed, with its summer-faculty retreat on an Indian reservation, the Nespelem Art Colony, which used teachers like Worth Griffin and, the biggest surprise of all, leading Abstract Expressionist Clyfford Still, who taught in Pullman for several years. They used indigenous petroglyph rock carvings for their inspirations. Still’s omission is a shame considering the museum in Denver dedicated to him featured an entire exhibition devoted to the Washington State paintings as recently as 2015. Without Still, “Origins” has a gaping hole, but the survey is nonetheless an admirable beginning for a young museum, one to build on and expand beyond locally available holdings.