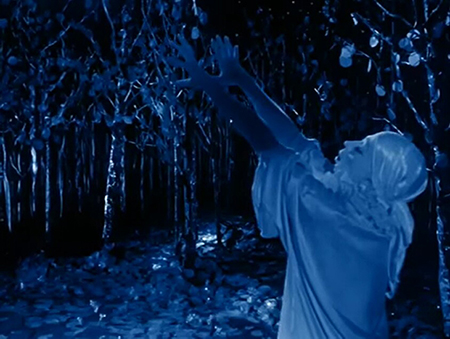 Admiration for all things lunar is the overriding theme of “Drawing Down the Moon,” an encyclopedic exhibition curated by Allegra Presenti that examines the universal affection for the moon as represented in both art and scientific writings and diagrams from multiple cultures and time periods. Titled after a 1979 book on pagan worship by the late author and Wiccan priestess Margot Adler, the exhibition has tapped into the rich resources of the Museum’s Grunwald Center for Graphic Arts, several other area museum collections, and a number of local artists’ studios to create an ambitious, albeit overcrowded, installation.

Selections range from written analytical studies by Copernicus and followers of Galileo to inspired visual interpretations by artistic luminaries such as Caspar David Friedrich, Edvard Munch, and Wassily Kandinsky. There is also a healthy dose of works by lesser-known historical figures, as well as by many of today’s leading artists.

Loosely organized into sections such as “Magic and the Moon,” “The Feminine Moon,” “The Mystical Moon,” “Moonlight,” and “The Material Moon,” the exhibition brims with cross-cultural and multigenerational comparisons. There is, for example, the contrast and connection between a 19th-century Japanese blue-and-white porcelain plate and Joseph Cornell’s c. 1970 collage “Lunar Luminescence,” both sharing space in the “Form” section because they emphasize the moon’s circular shape.

As for contemporary art, the exhibition contains plenty of noteworthy gems, starting at the entrance with Kenneth Anger’s landmark experimental film “Rabbit’s Moon,” which features a mime dressed as a sad Pierrot who dances and jumps up and down in a failed attempt to grab onto the moon. The exhibited version was updated by the artist in 1979 when he replaced the original 1950 soundtrack with A Raincoat’s “It Came In the Night.” The new soundtrack resulted in a work that prefigures the music videos that would debut just a few years later on MTV.

Contrasting with Anger’s energetic pace, Jennifer Bolande’s slow-moving “Set { } Piece” is included in “The Feminine Moon” section. It is a hypnotic portrayal of four women seen through the windows of a four-story building, each holding a book and turning its pages. Throughout, the camera pans upwards, creating the effect of continually descending elevators. Intermittently, the moon appears in the upper left frame of a six-module composition that, in the artist’s characteristically poetic fashion, calls attention to the cyclical nature of time.

In the realm of contemporary painting and works on paper, women dominate the exhibition, and there are truly stellar works by Helen Lundeberg, Lee Bontecou, Jay DeFeo, Michelle Stuart, Sue Coe, Vija Celmins, Alison Saar, and Laura Owens. Paintings by Lundeberg and Owens prove both artists to be exemplary paint handlers who meticulously shape their pigments in such a way as to bring a structural physicality to the imagery: the moon with an abstracted landscape on it in Lundeberg’s case, and a landscape with a moon as a backdrop in Owens’. DeFeo’s thickly painted abstraction and Stuart’s monumental hanging scroll offer forceful interpretations of the moon’s crusty surface.

The moon is treated as powerfully ominous in a drawing by Bontecou, where it seems to be controlling the movements of turbulent ocean waves. It is the driving force of evil in Coe’s apocalyptic 1986 painted critique of the Reagan administration. The moon’s power to evoke positive energy is hinted at in an etching/aquatint by Saar, where a solar eclipse image is formed by a corona light surrounding the Afro-style hair of scholar and activist Angela Davis. In an exquisite mezzotint of the galaxies by Celmins, the moon is but a speck in the vastness of the infinite universe.

There are, indeed, many other aspects of the exhibition that will enthrall, amuse or enlighten inquisitive minds. Three accomplished assemblage works display different temperaments: Derek Boshier’s is whimsical, Betye Saar’s is shamanic, and Michael C. McMillen’s is conceptual. There are also many surprises to be found for seasoned art viewers, such as the charming 1920s illustrations of witchcraft ceremonies by the Austrian painter and printmaker Stefan Eggler (1894-1969), and a Kandinsky-influenced 1940s abstraction by the Canadian-American painter Rolph Scarlett (1889-1984).

In short, “Drawing Down the Moon” is the kind of welcoming thematic exhibition that turns the museum into a place of both wonder and learning. This focused and accessible show is also an important reminder of the role that artists play in expanding our understanding of a familiar celestial object we often take for granted.