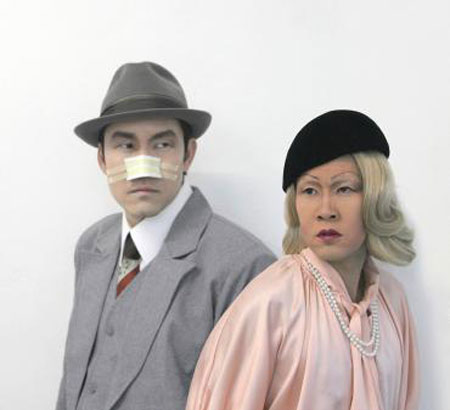 Ming Wong, who lives in a Turkish neighborhood in Berlin, has fond memories of the Hollywood, Bollywood, British and Malasian films he idolized as a child. The Singapore born video artist grew up play-acting himself impersonating a multitude of movie characters. After gaining international attention for his restaging of Douglas Sirk’s “Life of Imitation” at the 2009 Venice Biennale, Wong brings his cheeky reexamination of the making of Roman Polanski’s thriller “Chinatown“ to L. A. audiences.

Aggressively exposing artifice by ushering viewers into a darkened gallery from behind flats he has reconstructed to represent key scenes in the 70’s classic noire film, Wong casts himself in roles played by Polanski’s major actors, Jack Nicholson, Faye Dunaway, John Huston and Belinda Palmer. Unabashedly exposing issues of identity, race and sex, Wong transforms himself into a tantalizing noire heroine, simultaneously signaling his status as a man in drag by refusing to conceal the strip of masking tape he relies on to convert his eyebrows into a closer imitation of feminine beauty. If awards were given for video art reexaminations of filmmaking, Wong’s “Making Chinatown” would take home the Oscar.