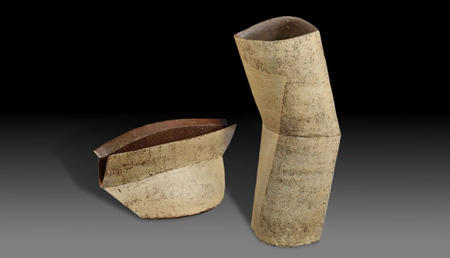 What is distinctive about “Tanba Modernism” is Keiichi Shimizu’s ability to honor a thousand-year old tradition, materially, while taking the functional ceramic form in an entirely new direction. This is geometric work which, despite its many angles, retains a feeling of simplicity. His “Vase form No. 9” retains the same basic shape as many of the elongated vase forms surrounding it, with a characteristic angle dividing it into an upper and lower section. The only overt connection to traditional Tanba pottery is the reddish clay, visible on the interior surface.

“Vase Form No. 8” retains a vase-like form but its interior, unlike that of “Vase Form No. 9” and other works, is a bright, bluish-white, surprisingly derived from an ash glaze rather than the unglazed red of the regional clay. It lends the vase an inexplicable beauty, and in general these are elegant sculptures. The white slip used decoratively on any one of a number of pieces is a striking example of a minimalist aesthetic.