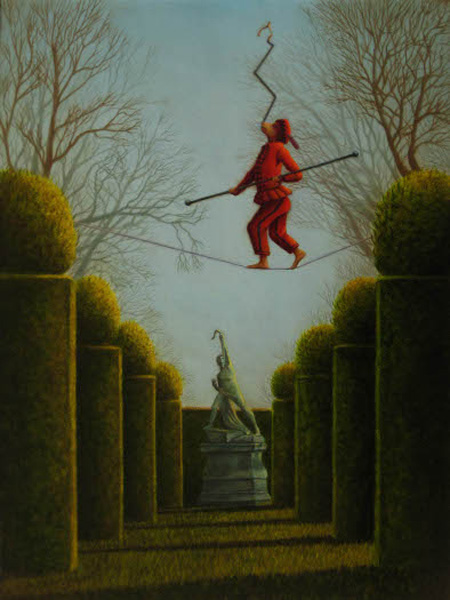 “The Garden” presents an absurd event against the backdrop of an idyllic landscape. The winding hedges of the garden’s greenery share the stylized, sculpted look of Steve Cieslawski’s other figurative elements: a pair of fighting wolves or dogs, seemingly boxed in a grave, and the graceful, leaping or falling shape of a man above them. Ciewslawski’s painting, along with the others in his current exhibition “The Manifest World,” is a Magritte-like Surrealist vision. It is the kind of work to which the viewer brings his or her own narrative, relating to it on their own terms.

“Checks and Balances,” a similarly fantastical vision, belongs to the same universe of sculpted gardens and acrobatic feats. There is also the threat of violence, due to the statue of an archer seemingly aiming his arrow at the hapless fool of a monkey precariously perched on a high wire in the foreground. It’s a nice companion piece to “The Garden,” presenting an ominous world of mythic proportions.