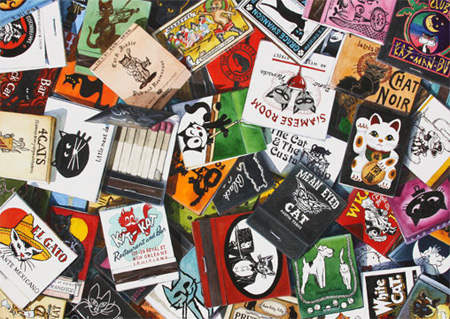 There is no curatorial or conceptual link among any three artists who simultaneously exhibit work here. As such, the current show featuring Cheryl Medow, Grace Swanson and Suki Kuss is a good example of the kind of eclecticism that can result from exhibits in this artists’ collective.

Cheryl Medow produces highly realistic digital pigment prints of birds and landscapes. They appear to be paintings but are, in fact, photographic composites of imagery layered together in the computer. With the new digital toolsets, Medow invokes the classic 19th century paintings of avian life by John James Audubon. Titled “In the Company of BIRDS,” Medow’s portion of the exhibit is startlingly fresh in its depictions of domestic birds in their natural habitat. A good example is the digital print titled “Great Blue Heron with Chicks.” The rendition of the mother Heron and chicks is hyper-real, but in the atmospheric background we gradually notice the outline of a map blended with the sky, a nice post-modern touch to this classic genre. Similarly, Medow’s print titled “Great Egrets” depicts a vivid white bird encircled by a digitally generated shadowy vignette that lends focus and added power to the singularly crisp image.

Grace Swanson, whose exhibit is titled “Illuminating Cats and Dogs,” is intrigued both by matchbook advertising art and cats and dogs as they are depicted in popular culture. Swanson is an inveterate collector of matchbooks and regularly incorporates them into her art. The images in the show, such as the watercolor titled “Canine Combustibles” are primarily highly detailed and realistic renderings of a random spread of matchbooks, all of which depict canines and felines on their covers. Swanson’s watercolor technique is sufficiently deft that a casual onlooker might initially take her images for photographs. Matchbook collecting is known as phillumeny, and Swanson has conjoined her passion for this activity with image making that is boldly graphic and highly colorful. Treading an aesthetic middle ground between kitsch and Pop Art, Swanson has deftly applied her precise watercolor technique to create celebratory images.

If Medow and Swanson’s art has a few tentative thematic connections by virtue of their realistic depictions, the collage abstractions of Suki Kuss, in her exhibit titled “Breathing Room,” has made a definitive commitment to abstraction. It is fitting that Kuss has dedicated her exhibit to the late abstract painter Franklyn Liegel, her longtime mentor and friend. Kuss creates collages that combine lace, vintage fabrics and sheet music into heavily layered works. There is a lot of negative space, which she provides to give the viewer a “restful place to breath.” Kuss’ work has been described as “femmage,” a verbal hybrid combining the notion of “feminine” with “collage.”

“Franklyn Calm” invokes the look and feel of Liegel’s abstract paintings. It uses highly feminine materials, lace and reflective bangles, in an austere, nearly monochromatic abstraction in a composition of poised verticality. Another mixed media collage titled “Rise” is a horizontal work that is even more minimally rendered with a very restricted color palette. It suggests a map of the world, yet is embedded with some pleasingly inscrutable icons that seem to be some kind of musical notation or alien legend for the map. There is a self-assured quietude in Kuss’s work that reinforces the title of her exhibit.