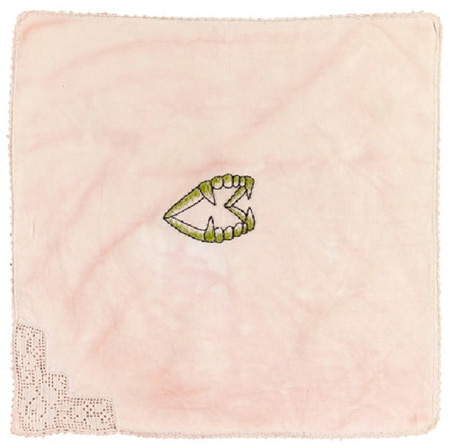 Embroidery as vehicle for subversive messaging is offered in "Declarative Sentences," where Mackenzie Boetes, Allison Manch and Ries Niemi imbue hackneyed expression and kitschy imagery with double (even triple) entendres. Niemi quips with pop iconography and wistfully humorous lines from deceased rock stars (“Dropping Science Like Galileo Dropped an Orange” is spelled out in silver thread above the ghostly silhouette of Beastie Boys’ MCA).

Shrewdly juxtaposed, Boetes’ embroidered hoops cluster on gallery walls like thought bubbles in conversation with each other. “The hardest thing is to act properly throughout one’s whole life” is spelled on a large hoop hung next to another tiny piece that reads, “WHAT THE HELL DOES THAT MEAN.”

Manch’s penchant for imagery of mythic Americana — from rock ‘n’ roll to the wild west — shines through on handkerchiefs stippled with bizarrerie like “Bikini Man,” whose hairy chest is immodestly covered with a string bikini and whose crotch is concealed by a rose that suspiciously resembles a clam.