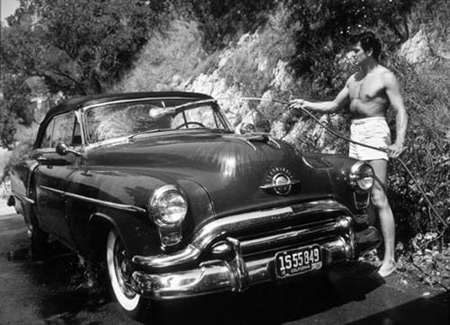 A fabulous exhibition of mid-century black-and-white shots by Hollywood-insider photographer Sid Avery is as tantalizing as it is timeless. In an age where celebrities are hounded ruthlessly by the paparazzi, shots of movie stars tend to be both ubiquitous and off-puttingly intimate. Back in the heyday of Hollywood, however, a mega-star’s public image was carefully monitored by agents and studio execs. Avery’s candid shots of celebrities were therefore something of an anomaly: neither posed nor artificial, but deeply revealing yet still respectful. He captured people doing average stuff, just not ordinary people.

Dean Martin and Sammy Davis, Jr. goof around off set and Rock Hudson suds up his car in the California sun. A particularly lovely snap shows Audrey Hepburn straddling a bicycle, her hair in a boyish blunt cut and a little dog in a basket attached to the handlebars. Behind the smoky lounges, the sparkling smiles, and the mid-day martinis we associate with the bygone days of Hollywood glamour, Avery depicted decidedly more down-to-earth movie star moments.