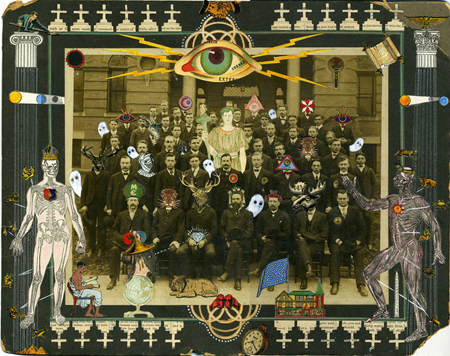 Michael Pajon, ''A Whisper, A Handshake, A Drop of Blood,'' mixed media collage with hand drawing on dismounted photograph, 17 x 20''.

Firecat Projects is the studio-turned-gallery space of Chicago artist Tony Fitzpatrick. "New New Orleans: Contemporary Art from the Big Easy" is a selection of four artists from the roster of the New Orleans-based Jonathan Ferrara Gallery. Fitzpatrick himself has had a longtime engagement with the arts in New Orleans, including exhibiting with the Ferrara Gallery. This exhibition is only the latest example of the reciprocal relationship between the visual arts communities of the two cities.

These four artists have distinctly different practices. Michael Pajon cuts out and reassembles vintage photos and illustrations, composing collages that are familiar and nostalgic, but also markedly bizarre. Dan Tague contributes two seemingly disparate bodies of work: slick photographs of artfully folded dollar bills, and a grid of ink drawings of tattooed knuckles. The graphite works of Monica Zeringue feature multiple self portraits, her female figures draped in flowing hair, struggling against their environments and one another. Dan Rule’s animations are neither durational narratives nor static two-dimensional works; instead, they occupy a grey area in between as dynamic, moving pictures. Though there is little connection among the artists in the way of content, what they do share is impeccable craftsmanship and bold vision.