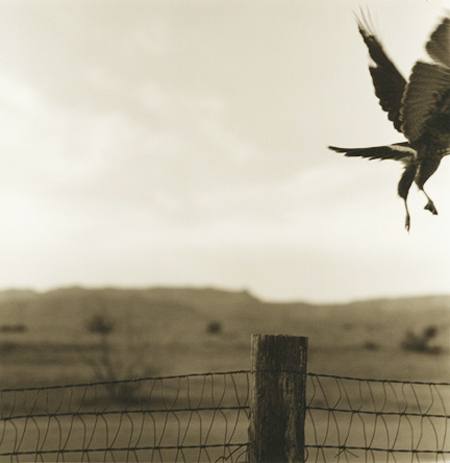 James Evans’ photography is the product of someone working in a small Texas town situated forty miles from Big Bend National Park. But it’s anything but provencial. His images exert an unexpected visual torque that makes it clear he’s definitely not producing mere “pretty pictures.” For instance, "Wedding Day Panoramic" is a linear landscape composed of three distinct striations: reddish, dusty ground; a sky so deeply penetrated by a shade of bluish aqua that it becomes an aperture exposing another realm; and a thoroughly ominous storm cloud that exudes a Biblical import — especially since a rainbow punctuates the image with a long, broad arc. "Wedding Day Panoramic" is thoroughly “Western” — but there’s plenty more at work. It’s enigmatic and, surprisingly, quite strange in ways that place it in a realm far beyond mere documentation. It’s too unnerving and too well done to be a slick postcard image of a world that you might think you already know (but don't).

This seems all the more plausible when you realize that Evans’ most interesting work moves along the margins of a thoroughly surreal sensibility. Much of it, in fact, will rock you back on your heels. "Don’t Let Us Get Sick" is a case in point. It depicts a thorny segment of dried flora that floats against a cloudy background. It’s spiny and rough, emanating a “prick-you-until-you-bleed” sensibility. It’s unnerving and riveting. "Hawk" is equally unsettling. The image is framed to show a bird of prey exiting the upper-right edge of the photograph with its legs oddly dangling toward a fence post and sagging wire. There’s something about the shape of the flapping wings and taloned feet that induces chills. This is “Lonesome Dove” with a dose of Hitchcock thrown in for good measure. “Good” is the operative term.