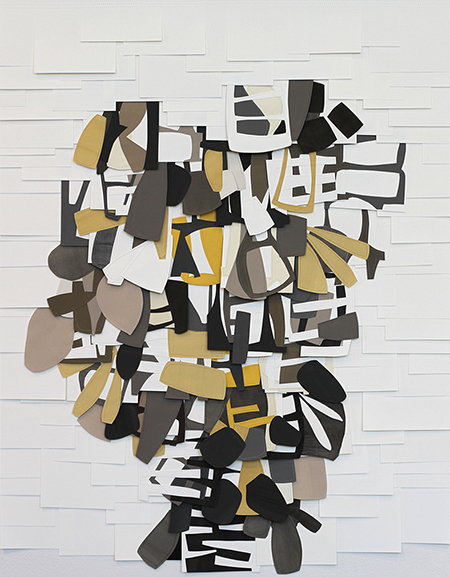 Raymond Saa’s newest work fills the gallery space with colorful signature collages. All executed between 2014-2015, there are two configurations on view with several smaller pieces at 36 by 30 inches that are made of sewn paper, charcoal and gouache, assembled with a sewing machine. The larger pieces are an imposing 76 by 72 inches and made of layered panels, some painted in mixed media while others are left blank. These clear panels form the deepest layer and serve as a type of background. Saa has used the word “shingle” to describe pieces that are formed of just one panel. In the boldly painted panel pieces, a repeating motif of blue, red, white, yellow and gray dominates. Saa attaches the panels to the base support such that they hinge at the top and seem to hang vertically, like so many multicolored post-it notes cascading down the long axis.

In his artist statement Saa claims that, “… the visual, auditory, and sensory minutiae that competes for daily attention is the inspiration” for his work and that he is “influenced by the resilience yet delicacy of botanical subjects particularly when it comes in direct conflict with urbanity.” This is clearly evident in the sewn pieces where the abstract shapes, taken together, resemble vines and leaves intertwined with themselves and the urban infrastructure they compete with to survive. On a formal level, the work attests to a deep and ongoing investigation of line, shape, form, pattern and rhythm, each contributing to an overall texture that binds the works together. It is here where Saa places himself firmly within the dialog and ongoing discourse of contemporary abstraction.