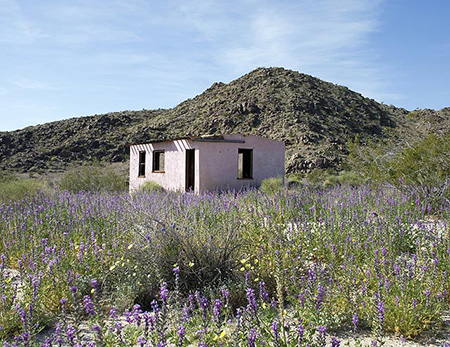 For those who have enjoyed Kim Stringfellow’s book “Jackrabbit Homestead: Tracing the Small Tract Act in the Southern California Landscape, 1938-2008,” this exhibition is a gratifying visual and audio supplement. For those who haven’t read the book, it is a small exhibition packed with fascinating histories. The introduction is to the left as you enter, where a vitrine displays homebuilder's flyers and magazines open to appropriate pages. There you can read some terrific first-hand accounts of homesteaders from the 1950s, although enlargements of these pages would have made for easier reading.

U.S. homesteading goes back to the 19th century, but in the Morongo Basin it was launched through the Small Tract Act of 1938. Tracts of land, five acres a piece, were offered by the government — you applied, paid a small fee. Landholders were required to build a small structure on the property. The flyers show homebuilders offering to throw up a small cabin for just over a thousand dollars. Not bad. Many from the L.A. area claimed their “jackrabbit homestead,” but then found it unsuitable for long term or even weekend habitation. Thus today the area around Joshua Tree, Twentynine Palms, and Wonder Valley is dotted with abandoned shacks. However, a few stayed, and in the last couple decades a number of artists, musicians, and other creative types who like and need space moved in.

One wall in the exhibition is covered with color portraits of those people — Andrea Zittel, of course, plus some you may not have heard of, including Diane Best, Chris Carraher and Perry Hoffman with his husband Doug Smith. Another wall is dedicated to photographs of abandoned jackrabbit homes, each accompanied by a framed copy of the original deed, written in very formal and lofty language which far outstrips the humble property. Finally, don’t miss the excellent oral histories available through the headphones. Stringfellow has added some evocative music and sound effects to their stories.