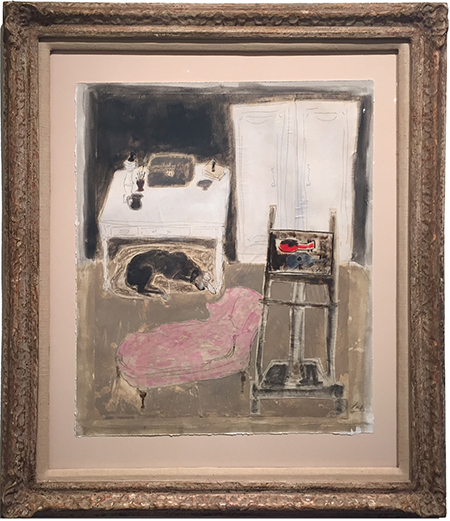 The subjects of Gigi Mills' exhibition, "The Surrender," embody the title in contrasting ways. Female figures lounge about in bed and on couches, munching on treats or staring off into space. They hang beside portraits of homeless Mexican men, sleeping on the streets in similar poses. I'd like to imagine that beneath Mills' sweetly modernistic style and neutral palette lies a cutting comment on growing global inequality. Or perhaps the body of work represents an internal battle between the artist’s bohemian roots (her mother was a trapeze artist, and she grew up in the circus) and her bourgeois present.

Instead, the surrender in question is likely a simpler matter. Mills is clearly head over heels for modernism, and the work dances through the vocabularies of famous painters of the past. "Reclining on Yellow" recalls Matisse's vibrant domestic interiors, her Mexican men carry the spirit of Picasso's "The Old Guitarist," and "Mexico/Sleeping Under the Stars" points directly to Rousseau's "The Sleeping Gypsy." This is true love, a romantic surrender to the past that makes these works all the more likable. And yet, I wish there was something more daring and contemporary about them. Mills' colors are perfectly calculated to match a designer's swatches, but where are the rebellious hues that would make these compositions sing instead of whisper? After a long lounge, the artist's next step should be a flying leap.