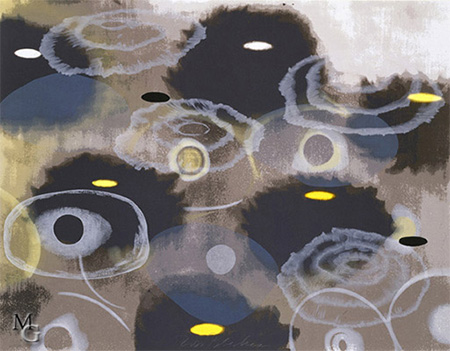 Ross Bleckner introduced a melancholy note into the otherwise carnivalesque art of the 1980s with large, elegiac oil paintings about emotional loss and the irretrievable past. They derived their energy from the AIDS pandemic of the time without being overly specific about it. Bleckner, an AIDS activist and philanthropist (and a United Nations Goodwilll Ambassador who has also worked on the problem of African child-trafficking), made a convincing case for sympathy and empathy with these generally dark, semi-abstract depictions of flowers, candelabras, domes, cupolas and starry skies. His nocturnes brought nineteenth-century sentiment — the Victorians faced death instead of ignoring it — into our age of alienation and instant gratification. Anselm Kiefer’s meditations on history serve a similar purpose of putting art, history and human destiny into perspective. These are religious paintings for a secular age.

Bleckner is such a consummate painter, however, that subject matter or subtexts that might seem off-putting to many attain in his hands a sober beauty. These floral-motif screenprints of the 1990s depict blossoms, minus stems and leaves, that appear to be floating on water, like Monet’s water lilies. Simplified into rough-edged overlapping ellipses of one color, and sometimes rendered in linear form, as in Chinese painting, the blooms hover tremulously, suspended in an abstract (i.e., non-perspectival) painterly mindspace. There’s a hint of the memento mori moralizing that lent meaning (and not just visual delight) to the precise Dutch flower paintings of the 17th-century. But instead of real, transient flowers described in microscopic detail, Bleckner depicts blooming (or conscious life) mystically and spiritually, as an infinite process.