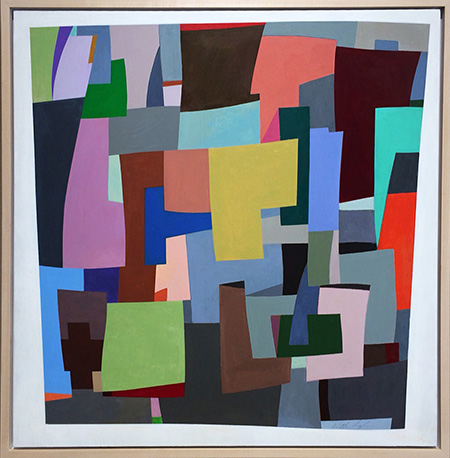 Artists in the late 19th- and early 20th-centuries developed abstraction in an organic response to rapidly advancing technologies that utilized invisible forces. The capabilities of telegrams, telephones or electricity are abstract concepts that only seem concrete to the contemporary mind. In "Online/Offline” a group of artists venture onwards to our new, digital frontier. Or rather, they perch on the barrier between the real and invisible worlds as it continues to erode. Through abstract and semiabstract work, this exhibition presents clear-eyed analyses of the glowing multiverse of the 21st century.

Utilizing a palette in the key of Matisse's "Jazz" series, Bill Sayler presents a contemporary update on the shifting planes of cubism and the manic, metropolitan wanderings of artists such as Stuart Davis and Piet Mondrian. Sayler's fragmented landscape, titled "Orange and Blue," engages with the work of Gary Oakley, who paints ethereal clouds atop horizontal bands à la Rothko. Nina Glaser and Warren Keating mimic pixels with mosaic tiles and dabs of paint, respectively. Ilse Bolle's "Ten," a series of paper boxes covered in encaustic wax and pierced with colorful linen filaments, could symbolize a computer network or data center. Even Patricia Pearce's exploded book artworks, Joy Campbell's sliced-up music pages and Jeff Smith's recycled steel sculptures seem like comments on our abandonment of the analog in favor of the digital, in this brave new context. "Friends, away! Let’s go!" wrote F.T. Marinetti in the Futurist Manifesto. The only way is forward.