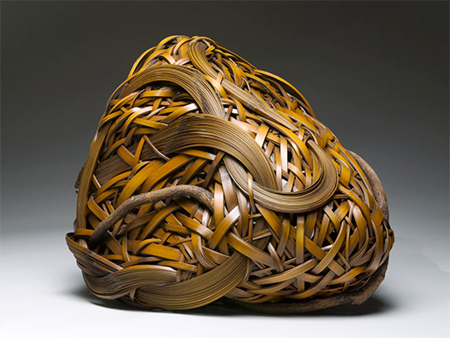 The most surprising aspect of the 35 bamboo sculptures by 16 Japanese artists is the wide range of forms, from baskets to large freestanding sculptures to wall pieces. Until about a century ago, bamboo artists were unnamed craftsman harvesting and manipulating bamboo to create baskets and other utilitarian objects. Even after they began signing their work, it took another few decades for them to be recognized as artists.

Bamboo is revered for its strong yet flexible qualities, which make it a challenging medium to work with. It takes years to master the art of harvesting, splitting, and molding it into a work of art. Although bamboo is a major art form in Japan, there are less than 100 professional bamboo artists today. Since 1967, six bamboo artists have been named Living National Treasures, and two of them are included in this show. The award was created by the Japanese government after World War II to celebrate and preserve the nation’s cultural traditions. Katsushiro Sōhō was so named in 2005 and is represented here by "Sunset Glow," a gleaming plaited and lacquered basket. He began as an apprentice in his early teens and continues to work into his eighties. Fujinuma Noboru, born in 1945 and designated a National Living Treasure in 2012, has two pieces, "Spring Tide" and "Gentle Heart," both of which reveal a high level of craftsmanship. Both artists descended from the famed Iizuka family, which dates back to the early 20th century.

“Modern Twist” demonstrates just how far the art form has come since it was reserved for utilitarian baskets, vases, ladles and tea scoops. Honma Hideaki’s "Shore II" resembles a crane, its arched neck and head creating an elegant curving form. Ueno Masao’s descriptively titled "Rotation of Ellipse Makes Two Transparent Drums" is a woven construction of such delicate branches that it appears nearly transparent. "Moonrise on Autumn Fields" by Uematsu Chikuyū is an amalgamation of bamboo, hemp, rattan, Japanese washi paper and lacquer. The artists in “Modern Twist” have been experimenting with abstract and conceptual forms for years, and in their masterful hands, the medium is being transformed and elevated to a new level of artistic creativity.