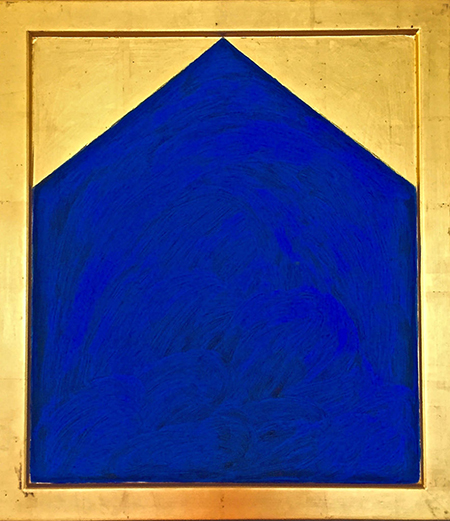 Exploring issues related to East-West cultural interactions, Li Huai mixes aspects of calligraphy and religious icons in “You Fascinate Me!” Showcasing a series of three multi-panel pieces that range from canvas and wood panels to works on paper, each series is aesthetically distinct and varied in its use of media. "All That Radiance" is a six-panel piece that features a stylized series of panels that might look more at home in a place of worship. Instead of religious icons as the subjects, a painterly blue pentagon (shaped like a house) is centered in each of the works. The simplistic forms glow with a brilliance associated to the rich materials.

In contrast, Li Huai’s calligraphy-inspired "All That Grandeur" is a mix of ink and acrylic that uses traditional Chinese brush painting techniques. Much like a giant doodle that has been carefully crafted and organized, larger shapes and images appear within loose contours that crawl in between each of the six frames that form one large image. The myriad of styles and marks going on in each of the series, speak to different cultures, locations, and experiences. Inspired by the artist’s love of travel and adventure, her transition from growing up in China (in the shadow of Mao Tse-Tung China) to studying and living in California has provided her with a set of tools employed to explore and reflect upon.