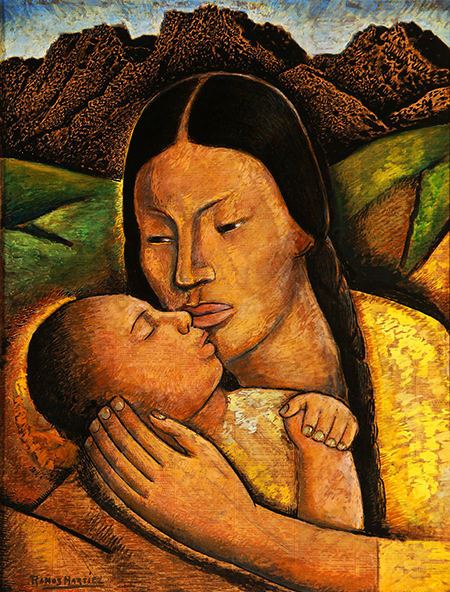 Artwork by artists from disparate parts of the world, who settled in Southern California and subsequently portrayed the local landscapes, is the central theme of “Golden Dreams: The Immigrant Vision of California.” Comprised of work by thirteen artists, whose birthdates span nearly a century, their idioms range from impressionism to modernism to contemporary. The oldest work in the exhibition is Austrian-born Franz Bischoff's exquisite “Still Life” (1920s), executed with brush and palette knife, in fauve-inspired colors. The roses that the artist grew in his Pasadena garden inspired the flowers that appear in the painting. The mixed media “Madre y Nino” (1945), by Alfredo Ramos Martinez, is a poignant modernist portrait of a Mexican mother and child that reflects the influence of the Mexican muralist movement.

“When Fields Lie Fallow” (1931) is a classic impressionist landscape by German-born William Wendt, who is often referred to as the “Dean of Southern California landscape painters.” Other artists exemplifying the impressionist style here are Sam Hyde Harris from England and William Darling from Hungary. The three most recent works in the exhibition are by Suong Yangchareon from Thailand. These photorealistic scenes of 1990s Los Angeles illustrate locales similar to those portrayed by the impressionists. Presented together as they are, we are able to visualize just how dramatically the region has changed over the decades. Other artists and countries of origin are: Conrad Buff, Switzerland; George Gibson, Scotland; Emil Kosa Jr., France; Axel Linus, Sweden; Sueo Serisawa, Japan; Edouard Vysekal, Czechoslovakia; and Richard Yip, China. As much as the landscape of Southern California has changed since the early 20th century, its role as a magnet for vast cultural diversity has not.