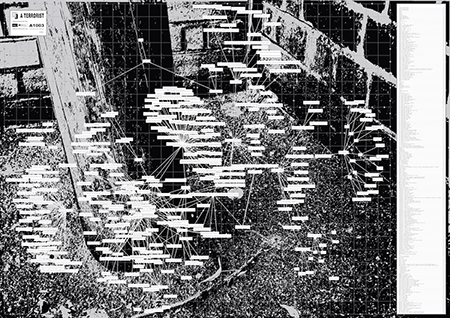 Heath Bunting’s dense, graphic mappings of very specific social statistics are, certainly as statistical graphs go, visually alluring. They become more resonant and consequential upon viewing via quirky titles what they purport to chart: “a natural person able to provide current full name colour map of influence;” “a terrorist background map of influence;” “the reach of being sexually active map of influence,” among other provocatively titled inkjet prints. The works are part of Bunting’s “Status Project,” which is his attempt to map “the system,” aka “the machine,” and “involves using artificial intelligence to search for artificial life in societal systems,” according to his bio. The UK-based Bunting has long been entwined with the forefront of internet exploration, from being a co-founder of net.art to engaging in artificial intelligence programming. His purported status of being banned from the U.S. (for his self-declared “anti genetic and border crossing work”), along with a generally checkered internet/art history, lends the 14 prints here from "The Status Project" a charged air of consequence and even threat. Coupled with recent stories around charting people’s internet search histories and what is says about them, and you get art merging with life on multiple levels.