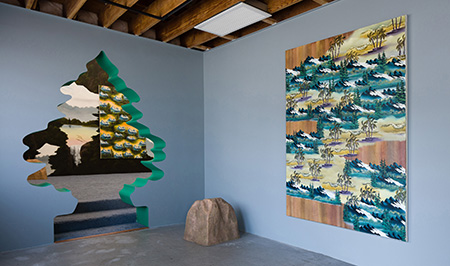 Thanks to an immersive installation complete with a pine-tree-silhouetted entryway (“Magic Tree Portal”), a fully wallpapered backdrop of repeating tree, mountain-scape and lake and waterfall patterns, and burbling rock fountains ("Beverly Falls 1 and 2"),  Neil Raitt has kept his post-modern Bob Ross-ian landscape paintings alive for a bit longer. The paintings themselves feature such go-to kitsch classics as sunsets, valleys and mountains (as well as a merger of mountain- and beach-scapes in two cases) that ironically imply the infinite within a finite space. As with his last show here, the paintings are simultaneously mesmerizing and infuriating, to the extent that they put so much weight on gimmick. Perhaps this level of provocation is to be commended, but the verdict is postponed for now, since the overall experience, aided most substantially by the “Mountain Waterfall” wall mural, has breathed sufficient oxygen into the equation to keep the enterprise going. The show’s title, “Misty Rock,” is derived from Room 191 at the Madonna Inn in San Luis Obispo, a hotel that’s legendary for its kitschy interiors. But these paintings (sans the overall installation) lack that hotel’s charms. It’s one thing for artists to be inspired by kitsch, in this case a now historic version of it, but it’s something else to declare and alliance with it. The cynicism in Raitt’s oeuvre, whether embedded or projected by the viewer, is ultimately too much to bypass.