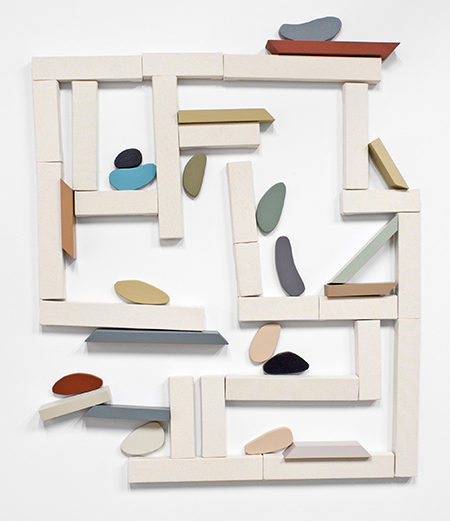 Robert Taite, "No Word on Daycare Yet," 2017, nothing on canvas, found latex on poplar and MDF, 36 x 29". Image courtesy of the Artist and Cydonia Gallery, Fort Worth

An exhibition titled “Vague Motives” by Canadian artist Robert Taite is his first solo show in the U.S. He lives and works in Winnipeg, where he draws inspiration from the urban environment and surrounding areas. He utilizes paint from hardware store mis-tints treated as found objects. Titles of individual works are whimsical and odd, like “To start, one with all colors, then one with one color,” or “Got more lighting in the studio yesterday.” His pieces are like deconstructed paintings mounted on the wall as a sort of canvas support, dispensing with the traditional canvas-as-a-window trope. This situates him firmly within post-conceptualist practice, where the art object exists as a re-materialized, yet disconnected, whole.

The pieces are composed of a host of materials, like clear gesso on canvas, MDF, and poplar treated with paint or found latex. They are spare and minimal, punctuated with solid abstract painted shapes in colors like red, black, taupe, blue, or green. These forms are attached to canvas supports that look like long beams. In general these assemblages are presented in canted or open-ended arrangements that defy any sense of an enclosed space. Additionally, they depend on the grid format as surely as they undermine its structure. In the deceptively simple and fascinating “Motility & Ecstasy,” three simple canvas beams form a “u” format, with one side longer than the other. The form awkwardly cradles two Arp-like ovals in the middle. At the topmost portion on one side there sits a green circle, and a set of three geometric forms in blue, grey, and red, on the other. With this work Taite contributes to the ongoing redefinition of 21st century painting.