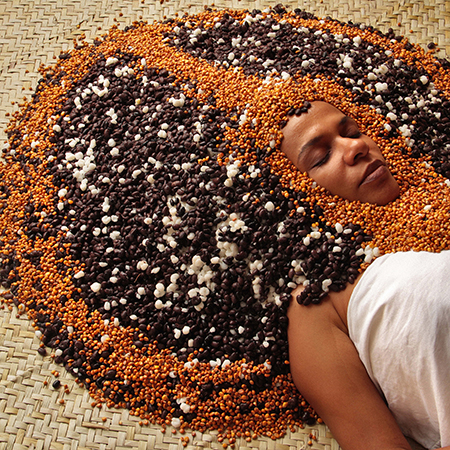 “Axé Bahia: The Power of Art in an Afro-Brazilian Metropolis” is a vibrant exhibition that attracts us with its exoticism and compelling story about the Afro-Brazilians in Salvador, Brazil. It opens with Goya Lopes’ “Sentidos afro-baianos” (2016), an installation comprised of five lengths of fabric hanging from the wall. Each is dominated by a color and associated with one of the five human senses, creating five chapters in the story-telling. It begins with the African art forms that influenced Brazilian culture to the slavery experience to the musical instruments that are used during the Afro-Brazilian religious practice Candomblé and the dance Capoeira.

The slave trade, which started in Brazil in 1538, when the Portuguese transported Africans to Brazil, can be traced back through an interactive map, created by Jamelle Bouie and Andrew Kahne. Two videos (2015) by Ayrson Heráclito, shot in the House of Slaves on Gorée Island in Senegal, show a performance of sacudimento, a spiritual practice in Candomblé, through which its members find healing from the trauma brought on by the slave trade.  Another eye-catcher in the exhibit is “Delírios de Catarina” (2017) by Caetano Dias, an installation made of two tables joined together as a symbol for the table on which slave holders dined and where slaves served and suffered. The latter is stressed through the numerous disembodied heads that obtrude from under the table. But rather than being a sad portrayal of Salvador and its people, the exhibit then takes an upbeat turn as its title promises —  Axé means “peace” or “let it be so!” — by displaying the works of artists who found inspiration by Candomblé