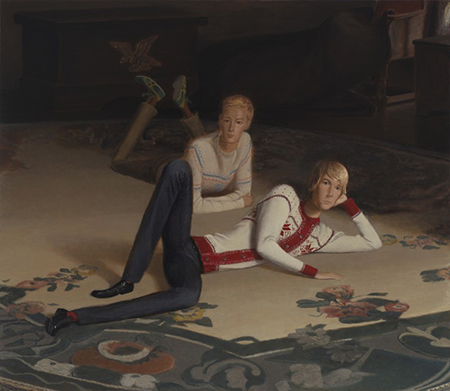 Jansson Stegner’s single painting of a buff though petite-headed volleyball player in “Engender,” recently at Kohn Gallery, stood out in an impressive show. Having seen a greater breadth of his oeuvre here, the reasons behind that work’s impact are now clearer, and not necessarily in the most reassuring of ways. As with John Currin, whose work Stegner’s mirrors in several ways, the paintings’ charge leans substantially on a quirky titillation, though Stegner adds to that vocabulary with some very intriguing plays with space and scale. Coeds abound, in tight uniforms with limbs so exceptionally long and lithe they often stray into caricature and the cartoonish, prompting associations with a pin-up gestalt.

In “The Bibliophile,” one such young woman, a pony-tailed blond in a tight sweater and white leggings, lays back on the floor with head turned to the viewer, while reaching up with said impossibly long legs and toeing a book from the top shelf of an impressively stocked collection. Is this Barbie with brains? Another, young volleyball player with a pouty-lipped model’s face and muscular arms and legs looks directly back at us. What might have been a provocative blending of genders and/or body types within one individual instead dissolves into just another form of objectification, if of the 21st century variety. Stegner paints males as well, and here they’re manifested in the show’s cover image: two Wasp-y brothers lying posed on a large, classically appointed rug. As with the portraits of the young women, it’s an amply sumptuous image, but the intellectual payoff, as you might get from a pinup portrait, feels bankrupt.