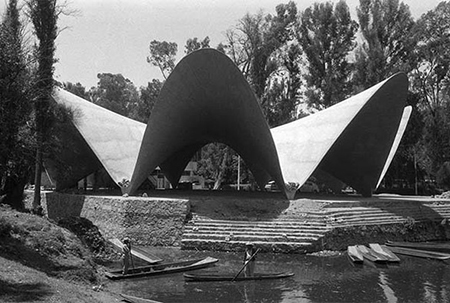 Spanish and Mexican architect Félix Candela (1910-1997) was an innovator of concrete structures, so it comes as no surprise that he taught for the better part of the 1970s at the University of Illinois at Chicago — a campus renown for its Brutalist architecture. This exhibition, “Félix Candela's Concrete Shells: An Engineered Architecture for México and Chicago,” is a collection of models and vintage photographs featuring a selection from the hundreds of thin-shell concrete buildings the architect created during his lifetime, as well as ephemera and collected memories from his widely influential UIC days.

Despite the similarities between Candela's work and that of Walter Netsch’s creations for UIC (the material, the stark formalism, the absence of decorative details), Candela’s parabolic slopes and curves seem to defy gravity with a lightness born of the architect’s passion for feats of structural analysis. If the dense concrete of Brutalism in the 1950s-70s projects the aura of a fortress keeping the outside at bay, then Candela’s “shells” of the same period are simultaneously delicate and resilient — a shelter prompting one to think as much about the form of the exterior as that which takes place within it.