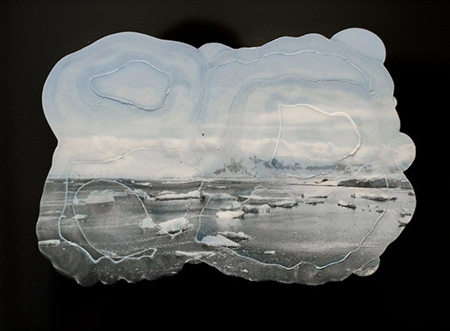 San Franciscan Tania Houtzager visited Antarctica in late 2016, attempting to capture the essence of that beautiful, desolate, endangered landscape in photographs and, for this exhibition, mixed-media photographic prints on hydrocal, a white gypsum cement often used for casting in place of brittle plaster. Houtzager, trained in sculptural mold-making and casting, embodies her Antarctic experience in “Melting Pot,” a series of inkjet transfer prints on hydrocal, with acrylic glass, each about the size of a book. She works with a pale blue and gray palette that, combined with the simulated currents, ridges and bubbles with which they are imbued, resemble blocks of ice, or iceberg calves.

One looks at these fossils or specimens as if they were preserved in museum vitrines; or from above, as if peering down from an airplane or satellite; but also at them, as if from a rubber raft drifting alongside. Works such as “Heavy Clouds,” “Heavy Clouds, Debris,” “Heavy Clouds, Top,” and “Heavy Clouds, Fug” draw the eye to see more imaginatively given the open associations of the subject (note: ‘Fug’ is a Britishism for “A heavy, musty, and unpleasant atmosphere, usually in a poorly-ventilated area”). Houtzager’s mixed-media works fuse sociopolitical content, given the reference to the effects of global warming, and aesthetic form beautifully and indissolubly. Kafka saw art as an axe to attack the frozen seas within us: our public fug about the shared natural world also requires intervention.