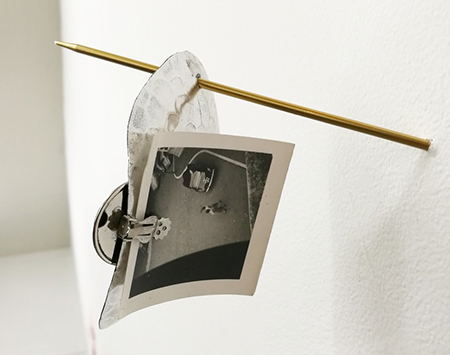 Chicago artists Laura Davis and Dan Devening seem to come from very different aesthetic camps. Devening is a cool formalist, while Davis culls from the sentimentality of mementos and found objects. Despite the differences in content, this pairing of artists forefronts the more nuanced characteristics that they have in common. Placement, perspective and temporality are the subject matter of this exhibition of both Devening’s collaged, two-dimensional works and Davis’ slight, sculptural assemblages. Both Davis and Devening favor an informality that belies the rigor of their practices.

A pattern of circles provides the framework for Devening’s series here, a rather minimalist appearance that complicates as the viewer moves closer. At a short distance, the smudges, smears and splatters on the paper are obviously studio debris, cut out and flatly layered, with oversized paper clips securing the edges. Likewise, Davis’ assemblages reveal more when viewed from every angle. In “Password,” a Polaroid of a street view is only visible when we lean on the gallery wall and turn our face back outward toward the gallery. The haphazardly painted ovoid board hanging from the ceiling in “Kiki” is revealed to be the cut-out of a woman’s head from a Man Ray exhibit poster, suspended by an earring. While there is an aura of nonchalance in the construction of both artists’ works, the end products display light yet superbly deliberate gestures.