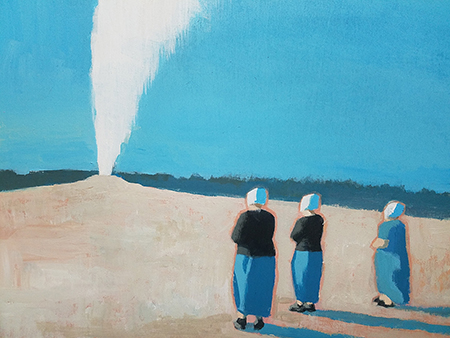 “Docufiction” highlights three artists who distort the truth in slyly humorous and even enigmatic ways. Drew Leshko plays with reality by creating mundane objects in miniature, using basswood, paper, wire and other materials. The objects could be mistaken for the real thing if not for their size. An example is “Mandarin House,” a palm-sized yellow sign for a restaurant where words have been crudely blacked out next to “Take Out.” The 8-inch-wide “Red Dumpster with Trash” demonstrates how Leshko imbues his objects with a certain ironic preciousness — it is enshrined in a vitrine.

Travis Walker, meanwhile, is a master of quirky juxtapositions, often referencing the American West. In “Danger Moose” two intrepid senior citizens get up close and personal with a moose. A more subtle painting is “The Watchers No. 2,” depicting three modestly clothed women, possibly Hutterites, admiring a geyser in isolated surroundings.

But the most mesmerizing work is that of Julie Blackmon, whose deeply narrative photographs flirt with our expectations as to what comprises a commonplace scene. In each print, the arrangement of props and selection of subjects force us to question which elements have been staged and which reflect the truth about the depicted people and places. Blackmon lets a complex tableau challenge preconceived notions about domesticity and acceptable behavior. A blond child pouts over brushing her long, wavy hair; a beheaded doll with similar hair lies nearby. A woman waits in a veterinarian’s office in a not-so-PETA-friendly fur coat. In “Peggy’s Beauty Shop,” two little girls stare at an elderly woman wearing a designer scarf and red shoes whose joie de vivre seems out of place in front of an aging hair salon.

The dialogue between culture and politics, given current propensities to blur the line between truth and fiction, suggests that “Docufiction” is an apt term for the confusion all around us.