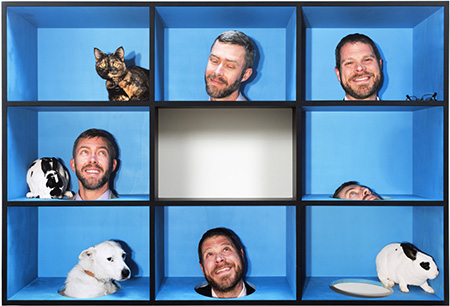 Anthony Lepore’s “Performance Anxiety” is a delightfully amusing exploration of visceral sculptural photography, where trompe l’oeil meets self-deprecation and all the titles are spot-on. One of the show’s highlights among many is “The Last Apology,” five brightly-colored archival pigment prints in deep-boxed frames that spell out “S-O-R-R-Y.” In each, nails so high-res you almost think they’re real jut from the top, bottom and sides in dangerously close proximity to the balloon letters within. To close the deal, real nails have been hammered into the sides of the frames, nailing the visual pun on the head, if you will. Though the surface ‘apology’ is apparently for the various visual tricks being unleashed upon us, there’s also a larger embrace of sorry-ness that may be read into the gestalt of the whole affair, as if Lepore is acknowledging a certain amount of indulgence in his visual antics.

“Disappearing Act” is a grid of cubbies featuring a cat’s tail at various angles and degrees of departure out of its respective cubby, with bona fide circular holes cut into the sides of the floor-standing frame, mirroring their photographic counterparts. “More Than a Hunch,” which features pets and heads (of cats, dogs, a bunny, and Lepore and a friend) sticking out of holes in a tic-tac-toe grid, is fun, silly and a “Brady Bunch” reference that also goes beyond to be something more existential. No, that’s actually too earnest an interpretation, and may be another reason for the ‘apology.’ “Growing Pains,” another standout, demonstrates that Lepore isn’t entirely wedded to trompe l’oeil flights of fancy. Within a parallelogram frame on a photo of a shelf rest a series of eight school-age portraits of the artist, from early elementary to young adulthood, in all of their quintessentially awkward glory. As much “anxiety” as Lepore endures, he’s still apparently up to the challenge of working through that anxiety — even on stage, such as it is.