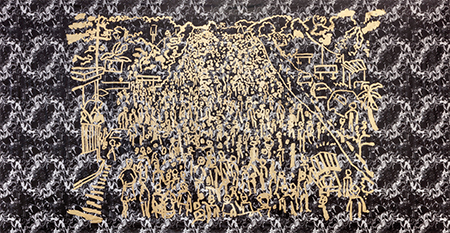 Two large-scale quasi-representational paintings are in thoughtful and evocative conversation with a suite of smaller abstractions in Francesca Longhini's exhibition, “Golden Anesthesia.” Linking these two bodies of work is the inclusion of gold leaf, though used in contrasting ways. She takes her inspiration from the early and Pre-Renaissance Italian masters, adapting their use of this material into both an accent and a mainstay formal device. “Migrant caravan” and “Disco!” span perpendicular walls floor to ceiling, one in each room of the space so that they cannot be viewed simultaneously. In them, Longhini juxtaposes a simplified depiction of a crowd scene in gold leaf with a patterned background of marbled black and white. This texture was created using a technique called Turkish Ebru, or marbling, then scanned and digitally duplicated to fill the large unstretched support. The top layer of gold leaf was drawn with glue and then gilded to give the finished works a glowing aura. Despite the fact that Longhini's depictions have a sketchy-linear quality, as if they were tracings of photographic images, they resonate on both a formal and conceptual level. By choosing to use pictures of crowds taken from disparate sources, Longhini is able to express a wide range of emotions these images elicit. She turns their very banality into something golden.

Juxtaposed with these large and powerful works, the small-scale abstractions are minimally covered with geometric shapes that call to mind Russian Constructivist and Suprematist compositions. In these subtle (particularly in contrast to the pair of large-scale works) mixed media pieces, Longhini combines green, white, graphite and gold leaf squares, lines and rectangles on a light or dark gray ground. The works are dynamic as well as architectural: the shapes appear to dance around and across the space. In “Contact points work Counterclockwise” small squares cantilever across the diagonal, connected by thin graphite lines. In “To Argue with an Uncompleted Ellipse” alternating squares of gold, silver and green form a partial ellipse that is connected to longer rectangles, the linear form left open at the top of the composition. These shapes assert a collective presence as they cascade across the small canvases. Their weighty titles give them an added dimension of conceptual resonance beyond their formal appeal.

While the scale and subject matter of Longhini's two bodies of work are unrelated, the gold leaf creates a bridge between abstraction and representation that echoes the artist’s linkage of Pre-Renaissance sensibility to the present.