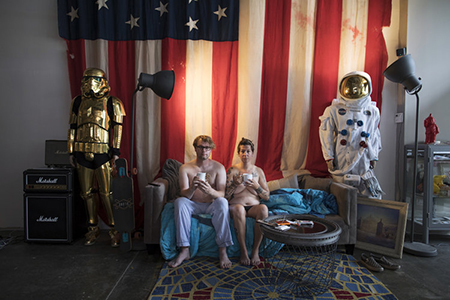 With the possible exception of the W.C., our bedrooms are the most private spaces in our homes. So it makes sense why Portland, Maine-based photographer Barbara Peacock says her “American Bedroom” show is a “cultural and anthropological study” in addition to a photo essay. In these images, all from 2016-18 and titled after their subjects’ names, you can divine a lot about people’s social station, body image, sexual orientation and other attributes just from seeing where they lay their heads, and with whom. Peacock trains her lens on families, singles, couples straight and gay, dewy and wizened. There is some tasteful naked flesh (some people sleep in the buff, after all): limbs, bellies, breasts, and butts in a diverse range of colors, sizes, and conditions. The bedroom, Peacock demonstrates, is both a great equalizer and an expression of individuality.

On the title labels the artist includes a quote from the interviews she conducted with each subject, a strategy that fills in some blanks that pictures alone can’t. On hot nights in Slab City, California, nine-year-old “Timothy” sleeps outside on a dilapidated sectional with the family dogs.  While the cellphone-gazing mom and dad in “Chase Family” and their two children relax on a mattress plopped unceremoniously on the floor of their middle-class abode, 18-year-old “Jessica” lives in more modest accommodations — a tent — while the homeless “China” makes do with blankets on a Manhattan sidewalk.  The most moving caption comes from an 88-year-old widower named “Pepere.”  Sitting listless on his bed, crucifix on the wall, Virgin Mary icons on his dresser, he mourns his late wife:  “When I wake up in the morning, I try to be very quiet so I don’t wake her.  Then I remember she is not there.”  The portraits are large-scale (40”x60”) and consequently a little grainy, but the effect imparts a painterly quality, heightened by sumptuous natural light.