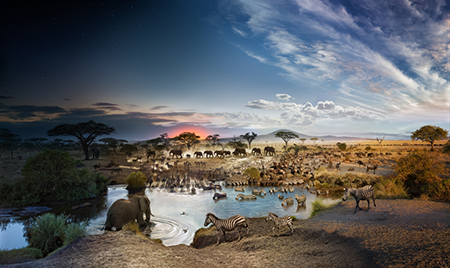 What can happen in a single location during the course of a day? In his exhibition “Day to Night,” Stephen Wilkes answers this question with a series of breathtaking panoramic photographs of people or animals at famous locations around the world. National favorites captured in the photos include Times Square, Coney Island, Santa Monica Pier, Yosemite National Park, the Grand Canyon and the Brooklyn Bridge. Foreign locations include sites in British Columbia, the Netherlands, Kenya, Tanzania and Iceland.

Initially, Wilkes’ photos seem to be single panoramic shots, but they are not. Unlike similar views of crowds in public places by noted photographers such as Andreas Gursky, Massimo Vitale or Doug Hall, Wilkes’ groupings are strikingly improbable. In “Brooklyn Bridge, Day to Night,” most of the figures are seen in active poses that appear simultaneously frozen in logistically improbable situations. Several are isolated from one another while running towards a couple jumping in the air. An even more obvious clue that something is askew is the divergent lighting; some areas appear in daylight while others are in darkness. In “Robson Bight, B.C.” there are too many sharks swimming in the same waters as distant sailboats for comfort, and reflections of sunlight at the center contrast with a full moon at night in the upper left. So what we are seeing are cumulative views. And, contrary to what this might suggest, Wilkes does not practice time-lapse photography.

Wilkes’ methodology is to shoot over one-hundred frames from a single vantage point while perched atop a crane for up to thirty-six hours from as high up as fifty feet. Back in the studio, he selects the fifty most interesting moments, and then seamlessly weaves them together digitally, a practice which he acknowledges was initially inspired by David Hockney’s panoramic photo collages.

In terms of expressive content, they convey the temperament of a chosen location. “Views of Coney Island” and “Times Square,” for example are energized by color and movement, while the serene and expansive landscape of “Serengeti National Park, Tanzania” feels idyllic. With various species comingling in a pond and elephants moving in procession off in the distance, we might infer that they are living a life of contentment. But this seeming paradise is illogically overcrowded. With so much wildlife in one place, the composition hints at the idea that there may not be enough natural resources to go around. As the darkness moves in on the light, the implication of an ending becomes palpable, a reflection of Wilkes’ ongoing concerns about land conservation and the potential extinction of some of the planet’s most vulnerable endangered inhabitants.