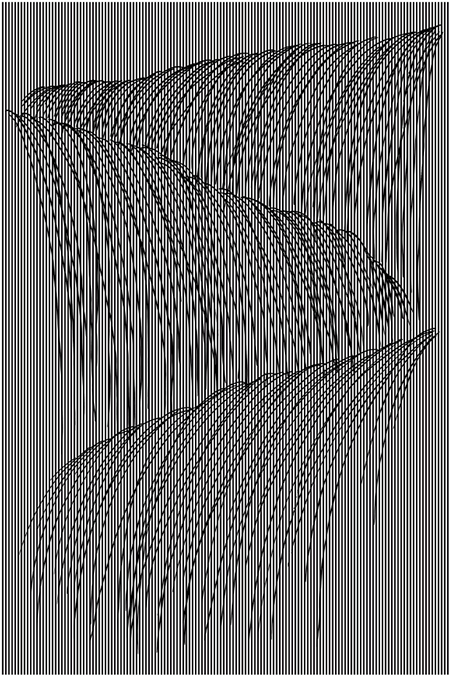 Interdisciplinary artist Tom Orr’s work is conceived to display a range of scales, with an eye directed toward site specificity. Orr, at core a sculptor, approaches everything he does through the lens of spatial relationships and how he might directly manipulate our perceptual experience. As such, stylistically he belongs to Op and Kinetic art, each one a part of the other with illusive territories. He imbues the two-dimensional works that make up this show with a sculptural sensibility.

The works on view are all on paper and explore the theme of waterfalls by depicting the illusion of water cascading down along a flat picture plane. As Orr explains, each piece starts with the entire surface filled with black vertical lines to which are added contrasting arcs that activate a moiré visual effect, in order to “create the sense of falling water in the form of waterfalls.” In the superb and all encompassing “Waterfall 6,” we experience a virtual waterfall twelve feet wide. The illusion at play has enough power to visually confound the viewer who, at first look, feels thrown into a vortex of rushing water. Op art is about movement, of both the art and the eye. Orr has mastered his ability to capture a retinal effect. The post war modernist pantheon of Op artists that already includes Agam, Cruz-Diez, Riley, Soto and Vasarely, ought to find a place for Orr as well.