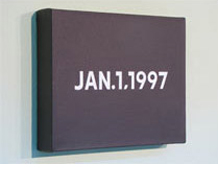 On Kawara is a New-York-based conceptual artist known for his "Today" paintings, faultlessly executed acrylics depicting their date of creation in white letters on black backgrounds, e.g., "Jan.1, 1997." Kawara's one-day artworks, accompanied by same-day newspaper clippings, treat the age-old themes of time and mortality in a deadpan style that seems equally bureaucratic, absurdist and Zen. His reticence invites viewers to fill in the blanks. In "Pure Consciousness at 19 Kindergartens" Kawara arranged for seven paintings (1/1/97-1/7/97) to be shown for two-month periods at nineteen kindergartens all over the world.

The paintings are shown along with booklets prepared by the participating schools - "from Istanbul to the Ivory Coast, from the Amazon to Avignon, from Shanghai to Toronto, from London to Lund," to quote one writer. Some viewers, noting how the photographed children ignored the wall-mounted paintings, may recall the traveling-gnomes photos in the film "Amélie." But devotees of conceptualism should read the local interpretations of the project's meanings, which praise its rigorous formalism, its poignancy, its transcendence of artworld dogma, and its attainment of the "gentle and innocent consciousness of children."