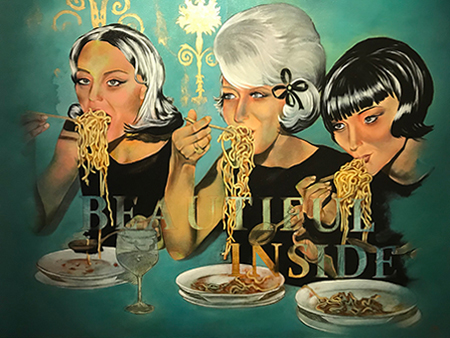 A sculptural dress mounted to a gallery wall draws one into the world of Judith Ann Miller, whose mixed media creations convey societal messages around gender norms and expectations. The dress, titled “Conformation/Control,” was created with vintage advertisements and images from sources such as newspapers and the Sears Roebuck catalog. Culled from modern American life during the mid-20th century, they reference common values of the day, from cleanliness to femininity. The theme of personal and societal expectations runs throughout these works. Men are clothed in suits, conveying the assumption that their worth comes from their work. Women are perfectly coifed. Collectively, they capture a theme that’s prevalent in Miller’s work — the relationship of interior and exterior personal worlds. Here, the artist questions society’s tendency to judge a person’s value based on outward appearance.

Several works feature vintage materials and designs, such as lace patterns one might find on a vintage tablecloth or dress. One grouping of six small-scale acrylic paintings depicts six girls, all surrounded by images of paper doll clothing. The clothes signal the ways identities are projected onto women, but also hint at the fact that these personas can also be removed or cast off. The artist also uses text in many of her works. One small piece, “Katie,” includes the following: “Katie became an artist, much to her mother’s disappointment.” These works have a sweet, cherubic quality. Miller’s paintings have an entirely different feel. Some are based on historical events, such as school desegregation. The figures have angular features and ominous shading, plus messaging written in capital letters, that gives them strong similarities to propaganda posters. Hence, the artist considers whether and when art and design become propaganda. But Miller primarily prompts reflection on present day conceptions and expectations about gender, using images from the past to suggest ways in which stereotypes persist into the present and beyond.