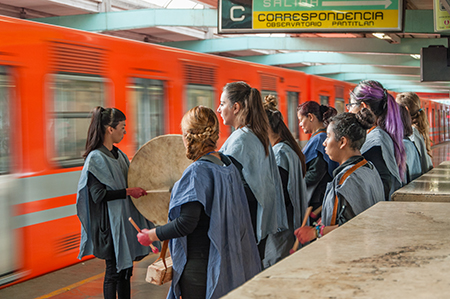 Inside a narrow passageway, ephemera from a collective sound action undertaken by Tania Candiani lines a single wall. The space echoes the site for her 2016 action titled “Pulso,” which was conducted inside subway passages in Mexico City. The subway was built over dried up lagoons, signaling to the artist the social, cultural and political significance of water. That context adds an important layer of meaning to this exhibit, situated in a desert setting where water bears witness to issues of power, identity and meaning. Videos shown on small monitors elucidate preparations for the public performance, orienting us to what we will encounter walking through the passageway to explore sketches, photographs and other elements documenting the artist’s creation and execution of “Pulso.”

The heart of the exhibition, curated by Julio César Morales, is an immersive three-channel video installation. The 11:43 minute color video played on a loop shows 195 women infusing subway spaces with their physical presence and collective sound created by playing pre-Hispanic slit drums called teponaztli. The instruments’ hollow property references female fecundity, but Candiani purposes the drums as revelations of female empowerment. The women wear cotton jackets inspired by traditional indigenous garments. They perform with palms colored by a natural red dye used in pre-Hispanic times by men preparing to hunt or go to battle. Collectively, these choices challenge gender norms and stereotypes — both present and past.

Another gallery space features a wall lined with the actual drums played during the Mexico City sound action. Mounted together, they serve as a proxy for the women who participated in the action. They poignantly convey the women’s individual and collective power. A simple armature stands in for a single performer, complete with jacket, drum and two red-tipped mallets that channel matches, a metaphorical signal of the spark that ignites a revolution. It’s set against a wall painted with red cochinilla ink, like that used during the performance. Another wall displays photographs that capture the perspectives of those who witnessed the subway intervention. The 3-channel video anchors this exhibition, but it’s the accompanying instruments and artifacts that bring the artist’s intention and its impact to life.