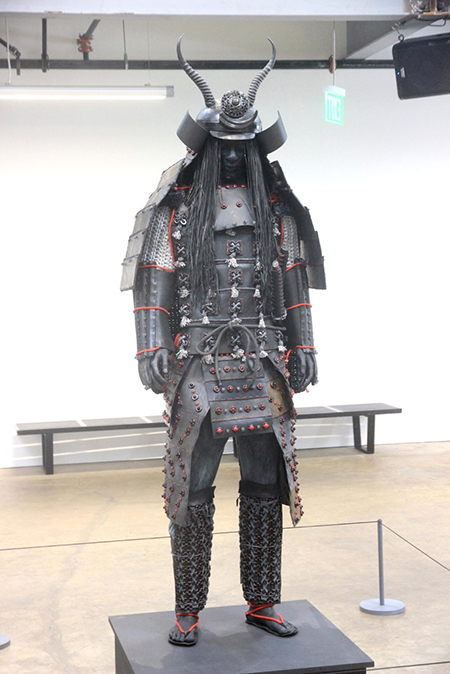 If you thought that Tom Cruise was the only non-Japanese samurai, there was a sixteenth-century samurai of African descent, Yasuke, who served under daimyō Oda Nobunaga and his son, Oda Nobutada, until both, defeated by rival warlords, were forced to commit seppuku. Probably coming from the Yao people of Mozambique, Yasuke was one of many Africans who entered Japan in that period via European traders and missionaries. His six-foot-two height and his pigmentation — “skin like charcoal,” in the words of a contemporary observer — fascinated Nobunaga, as did his warrior strength, reputed to be the equivalent of ten men. Yasuke, incidentally, was not forced into suicide; he was probably returned to the Portuguese or Italians with whom he had come to Japan in 1579.

Four life-sized sculptures of this mysterious figure comprise “Dark Stranger,” Nicola Roos’ examination of myth and historical memory. Roos, a South African artist, engages in what the gallery calls the “explorative reclamation” of that country’s nonwhite history. (They’re part of a larger project by the artist, the “No Man’s Land” series.) Her four “Samural” statues, differentiated in their titles by Roman numerals, may remind you of the famous ceramic Chinese-warrior figures in the tomb of the First Emperor, but those works were individual portraits, while these pieces are imagined depictions of someone who was never depicted.

Incidentally, Cruise’s movie, “The Last Samurai” will soon be joined in theaters by a film on Yasuke, with Chadwick Boseman, whose roles have included Jackie Robinson, Thurgood Marshall, James Brown and the Black Panther.