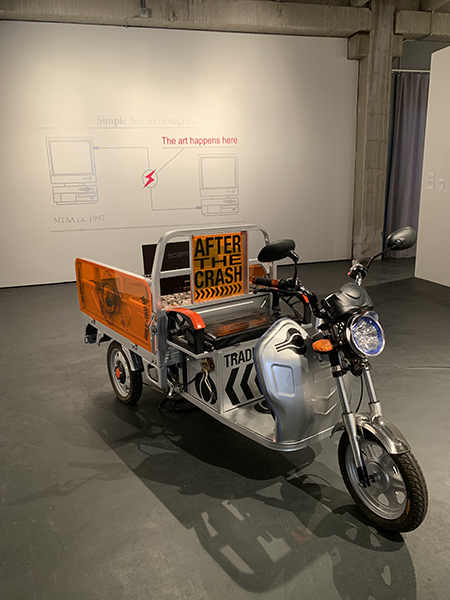 Affiliated with New York’s New Museum, Rhizome is known for researching, archiving and curating digital and internet-based art. The organization recently mounted a large online anthology of net art, from which the 16 international works in “The Art Happens Here: Net Art’s Archival Poetics” are drawn. Net art might rely on computer hardware and software, but some of its most nuanced and evocative elements “happen” through encounters between users and machines, whether the object is data gathering, social networking or webpage development. This excellent exhibition is concerned with capturing and preserving those nuances and, in turn, presenting them in an approachable, relatable form.

Tackling an emotional subject is “Lungs” (2005) by YoHa (Graham Harwood and Matsuko Yokokoji), which recalls the horrors of the Holocaust. While an old Dell computer displays vital statistics on slave laborers at a WWII-era German munitions factory, a speaker plays breathing sounds based on lung-capacity data as extrapolated from Nazi records. In the same darkened room is “Untitled” (2001) by Wolfgang Staehle, a silent video installation that’s gleaned from footage accidentally captured during the 9/11 collapse of the World Trade Center. At the time, Staehle had been using a webcam to capture various iconic architectural sites over several days, including views of Manhattan. Elsewhere in the gallery are installations confronting politics and economics. For example, Shu Lea Cheang’s “Garlic=Rich Air” (2002/2003/2019) features an electric cart filled with real garlic. Attached to it is a scrolling screen of supposed bartering data, part of an imagining of a post-capitalist society where garlic is the main currency. Other installations use archived internet data from obsolete applications and browsers to comment on family dynamics and romantic relationships, among other topics. The most amusing of the installations is Alexei Shulgin’s “386 DX” (circa 1998), an old PC that “sings” covers of the Beatles and the Doors in a droning, slightly off-tune voice. The shtick includes a money-filled paper cup and a screen message of “Spare some change to poor computer!” Not only does “The Art Happens Here” succeed in producing a variety of reactions, but it also engenders much admiration for the artists who pore through gargantuan amounts of computer data to transform it into memorable, meaningful installations.