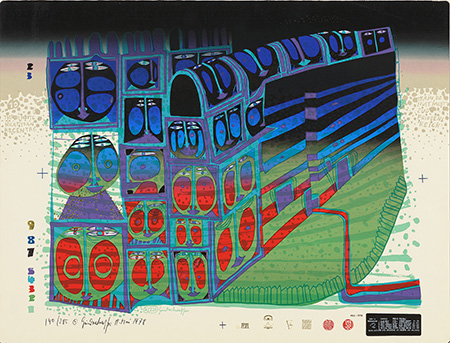 Friedensreich Hundertwasser (1928-2000) was, in his heyday, the anti-Neoplasticist. He despised straight lines and took pains to avoid them in his paintings and prints. This is very much in evidence in the prints central to this exhibition, deftly curated by Robert Kochs, one of the foremost living print experts in the United States. The Austrian artist, who lived out his later years in New Zealand, was a born romantic. His very name (which he legally changed into a compound construction evoking Wagnerian heroes — it translates literally as “Freedom’s Empire Hundred Waters”) is a paean to the nature-worship he would espouse during the course of his career as well as his environmental activism.

It is no coincidence that green is the predominant hue here, especially in “Slow Travel Under the Sun” (1969), with its stylized boat, island, and tidal vortex conjuring a fantasia of Amazonian exploration. Metallic imprints enliven its earth-toned palette with a gloss of proto-disco allure as the earthy 1960s give way to the flashy ’70s. The artist’s travels through Morocco and elsewhere in North Africa and the Middle East find expression in the minarets and onion domes of “Green Power” (1972) and “The Expulsion” (1967), which exude a Carnaby Street chromatic whimsy typical of the era. A strong sense of design permeates these prints, of curvilinearity deployed in the service of embedded ecological commentary. In today’s era of metastatic climate change, Hundertwasser’s verdant eco-idylls feel quaintly idealistic — blissfully, woefully ignorant of the reckoning that is to come a few short decades hence.